MY FIVE FAVORITE MUSICALS OF ALL TIME

When my grandfather first introduced me to classic movies when I was young, the first type of movies I watched were musicals. My grandfather was big on Eddie Cantor and Bing Crosby movies. Musicals were the 1930s and 1940s idea of fantasy movies where an emotion or mood could be conveyed through the art of a song. Looking back at old musicals they weren't very realistic, but boy are they fun to watch!

5. SILK STOCKINGS (1957)
This was the last musical Fred Astaire made at MGM, and what a great movie to end a long association with. Astaire and Cyd Charisse were great partners in this adaptation of the Cole Porter broadway show. By 1957, musical tastes were changing, and Astaire even spoofed the changes in the show topper "Ritz, Roll, And Rock". This movie is a must to see for any Astaire or MGM musical fan. 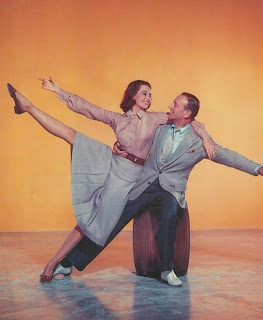 4. BLUE SKIES (1946)
Bing Crosby saved Paramount Studios from bankruptcy in the 1930s, and by 1946 he was one of the biggest stars in the world. This movie may be corny and sentimental by today's standards, but that is what I love in a musical. The pairing of Bing and Fred Astaire is great too, and this movie also boasts a massive Irving Berlin score. My favorite number in this film is the ballad "You Keep Coming Back Like A Song", which was nominated for an Oscar for Best Song. I keep coming back to watch this musical time and time again.

3. THE MUSIC MAN (1961)
When I was in seventh grade we had a music teacher who for one whole semester taught us about The Music Man. I will never forget that class. We disected and analyzed this great musical inside and out. We though Robert Preston is not a great singer, he is the Professor Harold Hill. The studios had discussed stars like Bing Crosby or Dan Dailey for the role. Preston originated the role on Broadway, and this movie not only gives me an appreciation for traveling salemen, but also it makes me want to visit Iowa and/or Gary, Indiana! The supporting cast of Shirley Jones, Buddy Hackett, Paul Ford, and a young Ronnie Howard make this movie too. 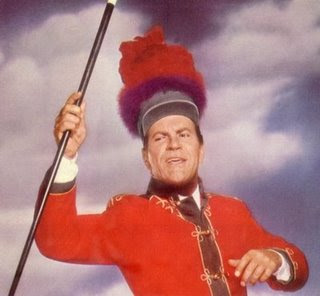 2. WORDS AND MUSIC (1948)
In the 1940s, song writer biographical movies were popular. However, they bore little resemblance to the writer's actual lives. Words And Music was the story of my favorite song writers Lorenz Hart and Richard Rodgers. In the movie they were played by Mickey Rooney and Tom Drake respectively. The plot of the story was nothing like their real lives, but what makes the movie for me is the music as well as the great stars that appear. Everyone from Judy Garland to Perry Como appeared in the movie. If you are a fan of good music then this movie is for you. If you are a fan of accurate biographies then read a book on Rodgers and Hart. Lorenz Hart is a fascinating character and Mickey Rooney plays him well.

1. SWEENEY TODD: THE DEMON BARBER OF FLEET STREET (2007)
I never thought I would have a modern musical as my favorite musical of all time. However, I am a huge fan of the movies of director Tim Burton, and Johnny Depp rarely makes a bad movie. Depp is not a singer, but he pulls of the role of Sweeney Todd perfectly. Tim Burton films the movie in such a way that you are transported back in time to the slums of London, and he uses colors in a way that the movie is nearly black and white. I am not a fan of the music of Stephen Sondheim, but they are presented in a way that they are woven effortlessly into the fabric of the movie. The movie is a little bit violent of course, but the story and the film itself is flawless - for a modern musical that is saying a lot. 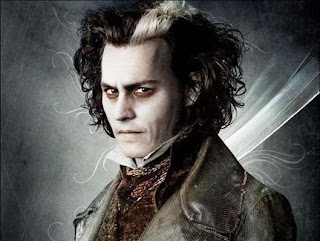