60TH ANNIVERSARY OF I LOVE LUCY 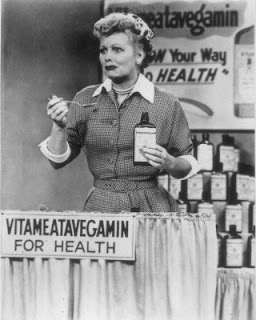 But we don't want to hear from them.

Not during the 60th anniversary celebration of the Oct. 15, 1951 TV premiere of "I Love Lucy" -- the simple comedy that cemented the sitcom template, made an enduring icon of star Lucille Ball, built a Hollywood studio and changed the "business" part of show business, for better or worse, by advancing the concept of reruns.

"I Love Lucy" would run on CBS for six seasons totaling 179 half-hour episodes, then another three years adding up to 13 occasional hour specials. Then it ran on CBS network daytime, in local station syndication and around the world -- as it still does -- before becoming one of the first shows released on VHS and DVD.

The half-hour series never ranked lower than No. 3 in the Nielsen ratings, finishing No. 1 four times. Its 1953 having-a-baby outing "Lucy Goes to the Hospital" -- aided by the near simultaneous birth of Ball's real-life son, Desi Arnaz Jr. -- still ranks as Nielsen's highest-rated episode of all time.

And all CBS wanted was to move Ball from her CBS radio hit "My Favorite Husband" to the burgeoning TV medium that had already welcomed radio favorites like Jack Benny and Groucho Marx.

Ball wanted to stay close to home to start a family, and insisted on starring with her husband, Cuban-born bandleader Desi Arnaz. CBS wasn't crazy about the heavily accented Arnaz until the couple did live stage shows to prove audiences bought them as a couple. The network objected even more to the couple planning to produce the show in Hollywood. With the use of videotape still years away, TV programs then aired live from New York for the much larger audience in the country's Eastern half. 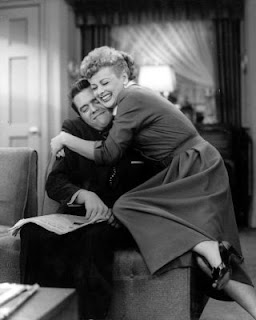 The story has become legend -- behind-the-scenes boss Arnaz turned a Hollywood soundstage into the kind of theater used by New York shows, bringing in bleachers for a live audience and playing before three film cameras, editing together the results for high-quality recordings to ship east. With "I Love Lucy" episodes preserved this way, they could be repeated -- and Arnaz was smart enough to retain ownership rights. Other shows soon wanted to tap this expertise, and Lucy and Desi's Desilu studio eventually took over the RKO lot where Ball had once made movies, churning out TV classics from Danny Thomas' "Make Room for Daddy" to "The Untouchables" to "Star Trek." (Desilu was sold to become Paramount Television in 1967.)

Sixty years later -- and 100 years after Lucille Ball's birth -- "I Love Lucy" continues to entertain audiences day after day, generation after generation. And it stands as one of TV's most influential series ever -- both on-screen and off. 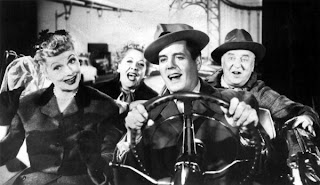 SOURCE
Posted by David Lobosco at 5:56 AM