THE SON OF LOUIS ARMSTRONG 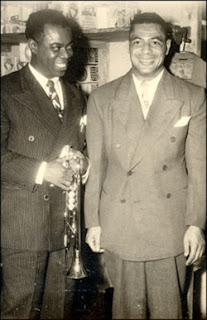 In Louis Armstrong's account in "Satchmo: My Life in New Orleans", he speaks of his only venture into paternity. Clarence (Hatfield) Armstrong was born in 1915 to Louis's teenage cousin, Flora, apparently after she was molested by an old white man, who her father felt powerless to challenge. Louis's first sight of the baby washed "all the gloom out of me." He took it upon himself, at 14, to get a job hauling coal (immortalized in the 1925 "Coal Cart Blues") to support the baby and the ailing mother, and assumed full responsibility after Flora's death. After Louis's teen marriage in 1918 to his first wife Daisy Parker, he adopting three-year-old Clarence Hatfield, when Louis was only 17 years of age.

In that period, Clarence fell off a porch and landed on his head; doctors judged him to be mentally impaired. When Louis later married Lil Hardin in 1924 in Chicago, Clarence joined them. Later Louis never forgave Lil for claiming that Clarence was never legally adopted —for her impatience with him. When he left Lil for Alpha (who he married in 1938), he brought Clarence along.

Years later, Clarence was set up in the Bronx, where he was married -in an arrangement of convenience to a 'Miss Lillian', financed by Louis. Clarence's surname is something of a mystery. According to Armstrong's friend, photographer Jack Bradley, he was listed in the phone book as Clarence Hatfield—but this may have been an expediency to keep nosy fans and biographers at a distance. Clarence often would accompany his father on gigs, and he even appeared with Papa Satch on the Eddie Condon Floor Show, one of Louis's finest television appearances on June 11, 1949. I tried to find out more info on Clarence, especially his later years, but all I could find out is he survived his wife Evelyn Allen Armstrong. 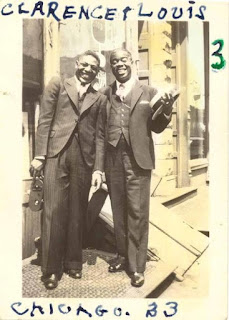