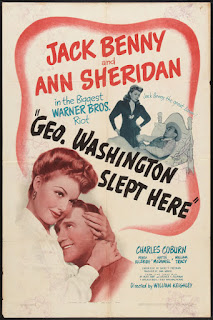 The movie George Washington Slept Here (1942) came first, but the movie is an awful lot like Mr. Blandings Builds His Dream House (1947). However, Jack Benny was really great in the Washington movie, and it can stand on its own as a pretty great film.

The play opened on Broadway, in New York City, New York, USA, on Friday, October 18th, 1940 and closed on Saturday, March 15th, 1941, after 173 performances. The cast included Ernest Truex, Dudley Digges, Jean Dixon and Percy Kilbride, who originated his movie role as Mr. Kimber. The film version, sparked up by the completely unexpected chemistry of dry-humored Jack Benny and "Oomph Girl" Ann Sheridan, is every bit as charming.

George Washington Slept Here" was an interesting departure for Jack Benny. Benny usually played a nice guy--a guy who let funny things happen to him and around him. However, since this film was based on a play, Benny played the role as it was written--acerbic and full of snappy one-liners. If you are used to Benny from his TV show or other films, this type of character is pretty different. Now I am NOT saying that this is a bad change. After all, considering how horribly stupid his wife (Ann Sheridan) is in the film, his sour disposition isn't all that bad--most husbands would have killed her! The film begins with Sheridan's dog, Ramy, getting the family tossed out of yet another apartment. So, without telling her husband, she buys a wreck of an ancient house in the country! Supposedly  George Washington is said to have once slept at the house. Needless to say, husband Bill is horrified--and keeps on being horrified as the price of renovation skyrockets.

In order to create the dilapidated farmhouse, the house used in Arsenic and Old Lace (filmed in 1941) was modified by knocking out bannisters, rafters and plaster.

Near the beginning of the movie, while still in his New York apartment, the character played by Jack Benny mentions "Hobby Lobby". This was a radio program that was first broadcast nationally as a summer replacement for "The Jack Benny Show". 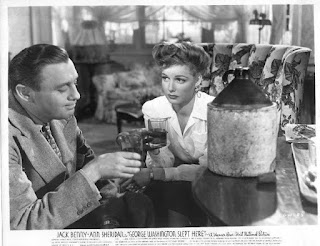 John Emery, playing actor Clayton Evans, says he's arrived in town to appear in a production of "The Man Who Came to Dinner", by George S. Kaufman and Moss Hart (who also wrote the play on which this film is based). Ann Sheridan played Lorraine Sheldon in the 1942 film version (The Man Who Came to Dinner), which was also directed by William Keighley.

The dog in the movie, called Terry, was also the same one in The Wizard of Oz, where it gained its fame, as Toto, three years earlier.

Leon Ames, who appears as a neighbor, makes reference to "The Man Who Came To Dinner" (1942), another Moss Hart/Irving Kaufman play. He states that he is appearing in that play in a community theater.

After seeing the play on Broadway, Jack Benny insisted that Percy Kilbride should reprise his role as the handyman, Mr. Kimber, in the film version. Benny managed to convince studio head Jack L. Warner to bring Kilbride out to Hollywood for a screen test, even though Warner thought there were plenty of local character actors who could take the handyman role. However, once filming began, Benny and his co-star, Ann Sheridan found they could barely get through a scene with Kilbride without laughing. Warned by director William Keighley that constant re-takes were taking the film over-budget, Benny finally had to resort to not sleeping at night, so that when he came to work in the morning, he would be too tired to laugh at Kilbride's character.

Jack Benny never really made it in movies the way his other comedy counterparts like Bob Hope and Jackie Gleason did. However, George Washington Slept Here as well as To Be Or Not To Be (also released in 1942) were two of Benny's best movies. Ann Sheridan was an underrated gem, and the movie as a whole is just a fun movie to watch. It is not the funniest movie, but it will bring a smile to your face. That is what great movies are all about... 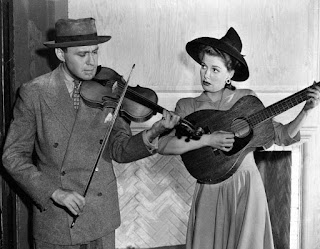 Posted by David Lobosco at 5:44 AM