THE CHILDREN OF AL JOLSON

During his career, Al Jolson was often called "The World's Greatest Entertainer", and often he would be the first person to tell you. Jolson also was one of the busiest men in show business too - from his broadway debut in 1911 until his death in 1950. He had time to get married four times, but only one of the marriages worked. It was surprising that Jolson had time for anything personal, but in addition to his marriages, he adopted three children. 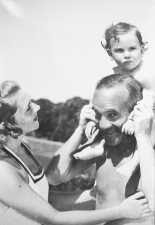 In 1935, Al Jolson and his third wife, Ruby Keeler, adopted a baby boy. This seven week old boy, of Jewish and Irish extraction, was named Al Jolson, Jr., although Al called him "Sonny Boy," and Ruby shortened that into "Sonny." According to Jolson biographers, Al Jr. seemed more attracted to Ruby than Al, as many children seem to prefer one parent over another. Jolson resented this and never really got close to the boy. After divorcing Al Jolson, Ruby Keeler married John Lowe, and at age 14 Sonny Boy became Albert Peter Lowe. After the divorce, Al Jr. never talked to Jolson again. He remained extremely close to his mother Ruby Keeler who died in 1993. Albert Peter Lowe passed away at age 72, in November, 2007. 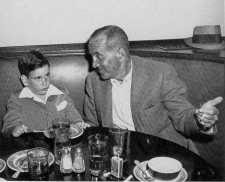 With Erle Galbraith, Al Jolson's fourth wife, a six month old baby boy was adopted in late 1947. A proud father again, Al told reporters: “We’ll send him to a good school - and a hard one. Want no spoiling of the boy.” They hired a nurse though Erle enjoyed taking care of the baby herself. Naming him Asa Albert Jolson, Jr., Al and Erle became doting parents for the toddler. It was after Asa's adoption that Al bought the perfect home for his new family, buying the home he had built for Ruby and himself back from Don Ameche, it's current owner, at a loss. 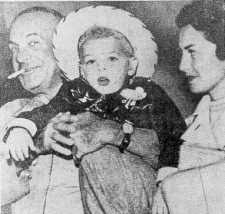 In 1950, the Jolsons adopted a second baby, a girl they named Alicia. Not known at the time of adoption, she was later diagnosed as being mentally challenged. Jolson died before this was discovered, and Alicia eventually required institutional placement. Alicia died in 1982, at the age of about 32. She is buried in Forest Lawn, Hollywood Hills along with Erle, Norman Krasna, and members of the Galbraith family. Known to his family as "Jolie," Albert Jolson is alive and well, living in Nashville, and pulled the cord to reveal the "Al Jolson Way" sign at the ceremony in New York in August, 2006. Albert Jolson also has owned a music studio for a number of years in Nashville. Albert and his wife Victoria had a daughter in 1983 that they named Kate. Kate Jolson was an all-star athlete in high school and college.

With Al Jolson's huge personality, it is hard to believe he ever had children. As is often the case, none of his children rose to the heights that Jolson did during his career. I also would be interested in knowing if Jolson was the greatest father as much as he was the greatest entertainer. That story is yet to be fully told...
Posted by David Lobosco at 5:09 AM