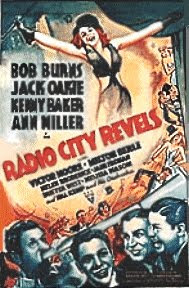 It has been awhile since I started watching old movies. When I started my love of classic Hollywood, there was no TCM buy luckily I had a dinosaur called the video tape recorder. Before TCM entered the airwaves, its sister channel TNT used to show old movies. It was there that I saw a mediocre musical called Radio City Revels.

The movie deals with two out-of-work songwriters in New York City, Harry Miller (Jack Oakie) and Teddy (Milton Berle), who live next door to sisters Billie (Ann Miller) and Gertie (Helen Broderick) Shaw, who used to tour in vaudeville and have been left stranded and income-less by its demise. Miller’s and Teddy’s only source of income is a correspondence course in songwriting that they’ve sold to exactly one student, Arkansas hillbilly Lester Robin (played by rustic comedian Bob Burns, who had enough of a reputation in 1938 he’s actually given top billing).

Robin is frustrated because while he’s awake he can only come up with songs other people already wrote (like an hilariously fractured version of “My Bonnie Lies Over the Ocean”) but when he’s asleep he dreams the most beautiful — and original — melodies and lyrics, only to forget them when he wakes up. Miller and Teddy realize this unique talent and start transcribing Lester’s nocturnal emissions, peddling them as their own and becoming star songwriters for the company owned by Paul Plummer (Victor Moore, even more annoyingly whiny than usual). The premise is so weird that at least one critic summed it up by saying it seemed as if the film’s writers had been asleep when they came up with it.

The draw of the movie for me was the appearance of singer Jane Froman in a minor role. She played the vocalist for Hal Kemp's band. It is infortunate that she did not have a bigger role, it might have helped the movie. Froman never had much of a movie career, but her voice was wonderful. Kenny Baker was the male vocalist in this opus. Baker got his start as the comic foil for Jack Benny on his radio show, and he left the Benny organization to make his way in film. Like Froman, Baker did not have much of a movie career either.

RKO spent some serious money on this movie — at least two of the numbers, including “There’s a New Moon Over the Old Mill,” are staged on splendiferous sets (the “Old Mill” number takes place on a beautiful white, stylized art deco mill and features four mill maids desperately waiting for male mates. Great comic actors like Victor Moore and Helen Broderick were features as second bananas in the film, but with no major stars it was hard to see who they would be second banana to. 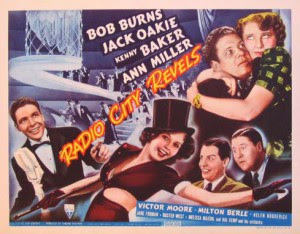 It is utterly baffling who they thought the audience for it would be, and as it turned out there wasn’t one: RKO spent $810,000 making Radio City Revels and lost $300,000 on it. The movie was not great, and it is mostly forgotten today, but the film is worth watching if it is just for the 1930s stars that the movie spotlighted...