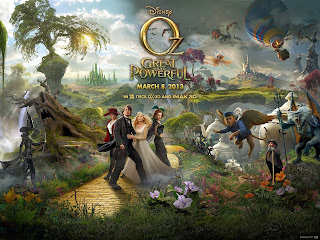 There are not many new movies that I have wanted to see. Spending over $10 for an overblown and overhyped CGI movie does not interest me. However, I did want to see this year's Oz, The Great And Powerful. I was amazed that I caught it on the Starz movie channel already, and I did not have to leave the house or spend $5 for a bag of candy to see it! Oz the Great and Powerful is a 2013 American 3D fantasy adventure film directed by Sam Raimi, produced by Joe Roth, and written by David Lindsay-Abaire and Mitchell Kapner. The film stars James Franco as Oscar Diggs, Mila Kunis as Theodora, Rachel Weisz as Evanora, and Michelle Williams as Glinda. Zach Braff, Bill Cobbs, Joey King and Tony Cox are featured in supporting roles.

The film is based on L. Frank Baum's Oz novels, and also pays homage to the 1939 MGM film, The Wizard of Oz. Set 20 years before the events of the original novel, Oz the Great and Powerful focuses on Oscar Diggs, who arrives in the Land of Oz and encounters three witches: Theodora, Evanora and Glinda. Oscar is then enlisted to restore order in Oz, while struggling to resolve conflicts with the witches and himself. Oz the Great and Powerful is set in the year 1905, 20 years before the events of the original novel The Wonderful Wizard of Oz. The film features several artistic allusions and technical parallels to the books and the 1939 film. 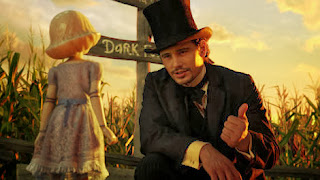 The film's opening sequence is presented in black and white. When Oscar is caught up in the tornado, the audio transitions from monaural to surround sound. Fading into color when Oscar arrives in Oz; additionally, the aspect ratio gradually widens from 4:3 Academy ratio to 2.35:1 widescreen. As in the 1939 film, Glinda travels in giant bubbles, and the Emerald City is actually emerald; in the novel, characters wear tinted glasses to make it appear so. The iconic green look of the Wicked Witch of the West is closer to her look in the classic film, as the Witch is a short, one-eyed crone in the novel.

The Wicked Witches are portrayed as sisters, an idea which originated in the 1939 film. Several actors who play Oz characters make cameos in the Kansas segments, such as Frank, Oscar's assistant whom he refers to as his "trained monkey" (Frank's "Oz" counterpart is the winged monkey Finley) and a young girl in a wheelchair who serves as the Kansas counterpart to China Girl (in Kansas, Oscar is unable to make the wheelchair-bound young girl walk, and gets a chance to do so when he repairs China Girl's broken legs). Another character, Annie (Michelle Williams), informs Oscar that she has been proposed to by a John Gale, presumably hinting at Dorothy Gale's parental lineage. Other referenced characters include the Scarecrow, who is built by the townspeople as a scare tactic and the Cowardly Lion, who is frightened away by Oscar after attacking Finley. Similarly, various other races of Oz are depicted besides the Munchkins; the Quadlings, the china doll inhabitants of Dainty China Country, and the Winkies (who went unnamed in the classic film). Similarly, Glinda is referred to by her title in the novel (the Good Witch of the South), unlike the 1939 film, where her character's title is "Good Witch of the North" (due to her character being merged with the Good Witch of the North). Theodora's tears leave scars on her face, reflecting her weakness to water. Also, Oz is presented as a real place as it is in the novel, and not a dream as the 1939 film presents. 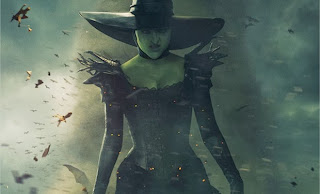 Oz, The Great And Poweful is a beautiful film to watch, and the whole movie is enjoyable. I am not a big fan of actor James Franco, and he always looks high to me, but he was believable in his role. The actress that stole the movie away in my book is the beautiful Mila Kunis. Kunis really channeled her inner witch as well as a tiny bit of Margaret Hamilton, who played the with in the 1939 film. I think personally that she made the movie. Although a lot of friends I know took their children to see the film, I don't think it is a family film. There are some adult storylines, but movie is definitely worth seeing. The movie is missing Judy Garland and the innocence of the 1939 movie, but it is still a great story... 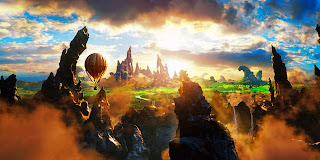