HISTORY OF A SONG: BALLAD FOR AMERICANS 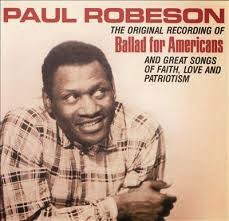 During this 4th of July season, now more than ever, we need to listen to songs that really spotlight how great our Country was and could still be. One such composition is the beautiful “Ballad For Americans”. The song is actually a patriotic cantata with lyrics by John La Touche and music by Earl Robinson.

Originally titled "The Ballad for Uncle Sam", it was written for a WPA theatre project called Sing for Your Supper. The show opened on April 24, 1939. Congress abolished the Project on June 30, 1939.

The “Ballad of Uncle Sam” had been performed 60 times.Producer Norman Corwin then had Robinson sing “Ballad of Uncle Sam” for the CBS brass. CBS was impressed and hired Paul Robeson to perform the song. Corwin retitled the song “Ballad for Americans.” Robeson and Robinson rehearsed for a week. On Sunday, November 5, 1939, on the 4:30 pm CBS radio show The Pursuit of Happiness, Robeson sang “Ballad for Americans” (Time, November 20, 1939). Norman Corwin produced and directed, Mark Warnow conducted, Ralph Wilkinson did the orchestration (in Robeson's key), and Lyn Murray handled the chorus. Robeson subsequently began to perform the song, beginning with a repeat on CBS on New Year’s Eve. Robbins Music Corporation published the sheet music.

Victor Records decided to record and release the song. Robinson recommended the American People’s Chorus for the recording and he re-rehearsed them in Robeson’s key. (Robinson had written the song to the key of E.) Nathaniel Shilkret conducted the recording. Time Magazine mentioned the album on the May 6, 1940 issue. On May 14, 1940, a full page ad for the records (a four-sided album on 78 rpm records) appeared in the New York Daily News. Each side of the album ended with the lyrics “You know who I am.” By the end of 1940, the album had sold more than 40,000 copies.

On July 6, 1940, Bing Crosby recorded the song for Decca. It became a huge hit for Decca and rivaled Paul Robeson’s version of it. Bing’s version is a scaled down version, along with more wording to fit his personality. Decca released the song as a two doubled sided blue label 78rpms. MGM then included the song as the finale of the 1942 movie Born to Sing (choreographed by Busby Berkeley and sung by Douglas McPhail). Jules Bledsoe, James Melton and others also performed the song. Lawrence Tibbett performed it on NBC for the Ford Hour. The British premiere was in September 1943 with the London Symphony Orchestra conducted by Hugo Weisgall. 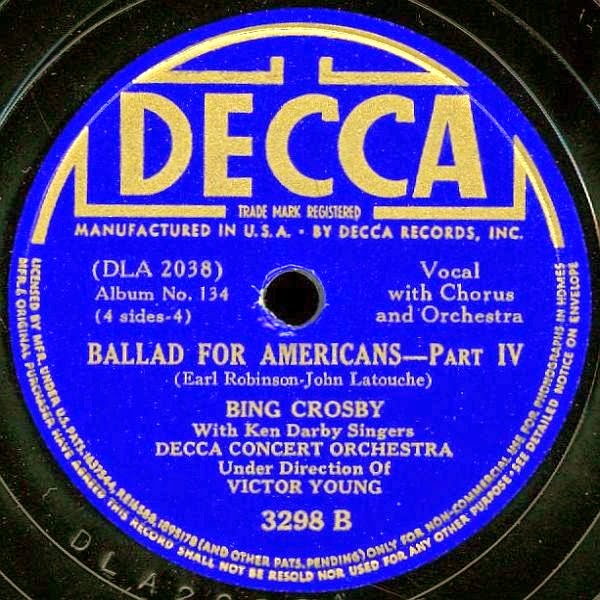 In the 1940 presidential campaign it was sung at both the Republican National Convention (by baritone Ray Middleton) and that of the Communist Party. Its popularity continued through the period of World War II — in autumn 1943, 200 African American soldiers performed the piece in a benefit concert at London's Royal Albert Hall. After the war, Robeson transferred from Victor to Columbia Records. Victor responded by withdrawing Robeson’s Ballad from their catalogue. In 1966, Vanguard Records released Robeson’s recording on a 331⁄3 rpm record. It has been periodically revived, notably during the United States Bicentennial (1976).

Invoking the American Revolution (it names several prominent revolutionary patriots and quotes the preamble of the Declaration of Independence), and the freeing of the slaves in the American Civil War (there is a brief lyrical and musical quotation of the spiritual "Go Down Moses"), as well as Lewis and Clark, the Klondike Gold Rush, and Susan B. Anthony, the piece draws an inclusive picture of America:

If you want to listen to what America is and should be listen to Bing’s version and the other versions of “Ballad For Americans.” It will give you a lump in your throat and pride in your country. God bless America…