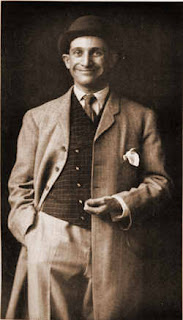 Although Al Jolson was considered the greatest entertainer of all time, there are very few snippets of information about Al Jolson's brother, Harry. Harry Jolson was born in 1882. A few years older than Al, he preceeded Al into show business, and following his older brother to New York provided Al Jolson's initial entry into the world of entertainment. Harry Jolson was the fourth and child of Moses Reuben and Naomi (Cantor) Yoelson; his four siblings were Rose, Etta, another sister who died in infancy, and of course Asa (aka Al Jolson).

In 1891, his father, who was qualified as a rabbi and cantor, moved to New York to secure a better future for his family. By 1894, Moses Yoelson could afford to pay the fare to bring Naomi and his four children to America. By the time they arrived, he had found work at the Talmud Torah Synagogue in the Southwest Waterfront neighborhood of Washington, D.C., where the family was reunited. Hard times hit the family when his mother, Naomi, died in late 1894.

According to several sources, the boys entertained together on the streets of Washington, DC, providing the nascent chemistry for their early stage acts. In 1929, Harry Jolson appeared in the film The Voice of Hollywood, in a short comedy routine, with Lola Lane.

Through their lives, their careers diverged and intersected. Harry often played a venue after Al, Al would hire Harry as his manager, some say to keep him off the stage. Some reports say that Harry had a better voice than Al; the paucity of recordings of Harry and the performance records of the brothers would belie that supposition.

Whatever animosity there was seemed to dim following Al Jolson's passing, with Harry Jolson appearing on a television program in tribute to his later brother, and recording a eulogy to "my brother Al." In 1948, Harry's wife Lillian died at the age of 58 of a heart ailment, and he was never the same. His brother Al died in 1950. Three years after Al Jolson passed away, his older brother, Harry, left us, as well. In contrast to the elaborate Jolson gravesite, Harry's grave has but a simple marker... 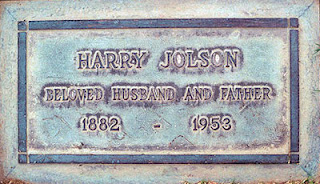