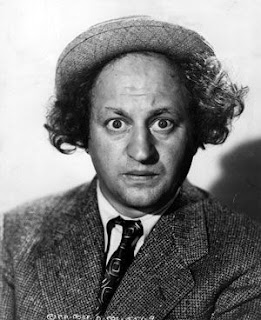 Fine was born to a Jewish family as Louis Feinberg on October 5, 1902 in Philadelphia, Pennsylvania, at the corner of 3rd and South Streets. His father, Joseph Feinberg (who was Russian-Jewish), and mother, Fanny Lieberman, owned a watch repair and jewelry shop. When Larry was a child he burned his arm with some acid that his father used to test whether or not gold was real: having mistaken it for a beverage, Larry had the acid bottle to his lips when his father noticed and knocked it from his hand, accidentally splashing Larry's forearm. Later Larry received violin training to help strengthen his damaged muscles; this skill would be put to use in many of the Stooges' films. He became proficient on the instrument, and his parents wanted to send him to a European music conservatory, but the outbreak of World War I prevented this. In scenes where all three Stooges are playing fiddles, only Larry is actually playing his instrument; the others are pantomiming. To further strengthen his arm, Larry took up boxing as a teenager. He fought and won one professional bout. His career as a pugilist was stopped by his father, who was opposed to Larry's fighting in public.

As Larry Fine, he first performed as a violinist in vaudeville at an early age. In 1925, he met Moe Howard and Ted Healy. Howard and his brother Shemp had been working as audience stooges for Healy. Shemp left soon after to attempt a solo career and was in turn replaced by another brother, Curly. Larry's trademark bushy hair came out, according to rumor, from his first meeting with Healy, in which he had just wet his hair in a basin, and as they talked, it dried oddly. Healy told him to keep the zany hairstyle. Beginning in 1933, The Three Stooges made 206 short films, and several features, with their most prolific period featuring the characters of Larry, Moe and Curly. Their career with Healy was marked by disputes over pay, film contracts, and Healy's drinking and abuse. They left Healy for good in 1934. 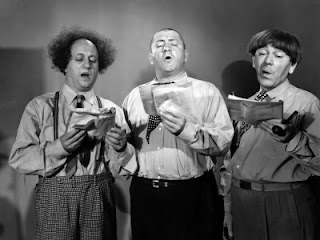 Offstage, Larry was a social butterfly. He liked a good time and surrounded himself with friends. Larry and his wife, Mabel, loved having parties and every Christmas threw lavish midnight suppers. Larry was what some friends have called a "yes man," since he was always so agreeable, no matter what the circumstances.

Larry's devil-may-care personality carried over to the world of finance. He was a terrible businessman and spent his money as soon as he earned it. He had a serious gambling addiction, and would gamble away all of the money he had on him either at the horserace track or at high-stakes gin rummy card games. In an interview, Fine even admitted that he often gave money to actors and friends who needed help and never asked to be reimbursed. Joe Besser and director Edward Bernds remember that because of his constant and free spending and gambling, Larry was almost forced into bankruptcy when Columbia terminated the Three Stooges comedies in December 1957.

Because of his profligate ways and his wife's dislike for housekeeping, Larry and his family lived in hotels — first in the President Hotel in Atlantic City, New Jersey, where his daughter Phyllis was raised, then the Knickerbocker Hotel in Hollywood. Not until the late 1940s did Larry buy a home in the Los Feliz area of Los Angeles, California.

The Stooges became a big hit in 1959 on television, when Columbia Pictures released a batch of the trio's films. The popularity brought the Stooges to a new audience and revitalized their careers.

Returning to work, Fine and the Stooges were working on a new TV series entitled Kook's Tour in January, 1970, when Larry suffered a debilitating stroke that paralyzed the left side of his body. He eventually moved to the Motion Picture House, an industry retirement community in Woodland Hills, where he spent his remaining years. In spite of his paralyzed condition, he did what he could to entertain the other patients, and was visited regularly by his friend Moe Howard.

Fine used a wheelchair during the last five years of his life. Like Curly Howard, Fine suffered several additional strokes before his death on January 24, 1975. He was entombed in Glendale's Forest Lawn Memorial Park Cemetery in the Freedom Mausoleum, Sanctuary of Liberation... 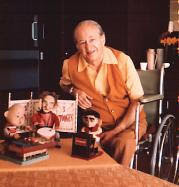