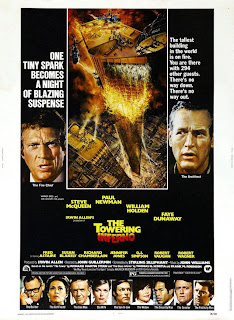 One of my happiest younger memories was on a lazy Sunday I would put in a long movie and just lay and get so sucked into a movie. One such movie that I remember watching is THE TOWERING INFERNO. THE TOWERING INFERNO was a 1974 American action disaster film produced by Irwin Allen featuring an all-star cast led by Steve McQueen and Paul Newman.

A co-production between Twentieth Century-Fox and Warner Bros. (this was the first film to be a joint venture from two major Hollywood studios), it was adapted by Stirling Silliphant from a pair of novels, The Tower by Richard Martin Stern and The Glass Inferno by Thomas N. Scortia and Frank M. Robinson, and was directed by John Guillermin, with Allen himself directing the action sequences.

After the success of The Poseidon Adventure, Warner Bros. bought the rights to The Tower for $390,000. Eight weeks later, Irwin Allen discovered another novel, The Glass Inferno, and bought the rights for $400,000 for 20th Century Fox. The productions were combined, with a budget of $14 million ($58 million adjusted for inflation 1974-2005). Each studio paid half the production costs. 20th Century Fox had the United States domestic box office receipts while Warner Bros. would distribute the film in all foreign territories around the world. 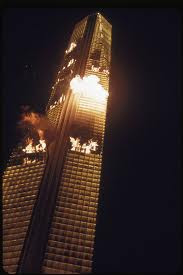 Stirling Silliphant, who won an Oscar for his adaptation of In the Heat of the Night, combined the novels into a single screenplay. Silliphant took seven characters from each and combined the plots. In The Tower, a bomb in the utility room of a 150-floor tower (the world's tallest) causes a power surge which sets a janitor's closet on fire; the escape from the top floor is by breeches buoy to the adjacent 110-story North Tower of the World Trade Center, and is only partially successful. More than a hundred partygoers die in the restaurant on the top floor. In The Glass Inferno, an electrical spark sets the janitor's closet in a 60-story tower on fire; the escape from the top floor is by helicopter, and everyone left in the restaurant escapes.

The 57 sets and four camera crews were records for a single film on the Twentieth Century Fox lot. At the end of filming of principal photography on September 11, 1974 only eight of those 57 sets were left standing. William Creber is credited as Production Designer of the film and under his direction, Dan Goozee from the Fox art department designed the final look of the Glass Tower itself.

Small parts played by actors who appeared in The Poseidon Adventure, which Irwin Allen also produced, include John Crawford, Erik Nelson, Elizabeth Rogers, Ernie Orsatti, and Sheila Matthews, who played the mayor's wife 'Paula Ramsay'. She would later become Irwin Allen's wife and remained so until his death in 1991. Jennifer Jones' role of 'Lisolette Mueller', her last before retiring from acting, was originally offered to Olivia de Havilland. The fireman in the scenic elevator was played by Paul Newman's son, Scott.

In the initial stages of the film's development, the fire chief's role was relatively minor – the architect was the hero. Fire Chief Mario Infantino was to be played by Ernest Borgnine, and Steve McQueen was to play the leading role of architect Doug Roberts. However McQueen requested the fire chief's role, so it was suitably revised and augmented. Paul Newman was cast as the architect. 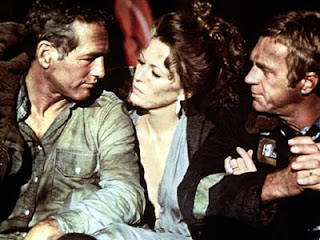 McQueen, Newman, and William Holden all wanted top billing. Holden was refused, no longer in the league of McQueen and Newman. To provide dual top billing, the credits were arranged diagonally, with McQueen lower left and Newman upper right. Thus, each appeared to have "first" billing. McQueen is mentioned first in the film's trailers. In the cast list rolling from top to bottom at the end of the film, McQueen and Newman's names were arranged diagonally as at the beginning. As a consequence Newman's name is fully visible first here. This was the first time "staggered but equal" billing was used. It had been discussed for the same actors when McQueen was to play the Sundance Kid in Butch Cassidy and the Sundance Kid. McQueen was eventually replaced by Robert Redford, who took second billing.

In the 2010 biography by AE Hotchner titled Paul and Me, reference is made to the commotion caused by Steve McQueen due to his apparent displeasure at having a lesser part. McQueen discovered that Paul Newman had twelve more lines than he did, something that was soon changed. According to the book, Newman's salary from the movie totalled $12 million. 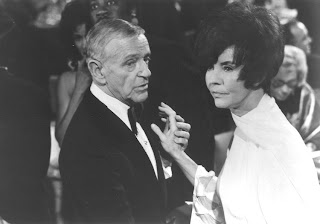 The movie also marked the last acting role for the great Jennifer Jones. She is wooed in the film by the legendary Fred Astaire, who was nominated for an Oscar for his role. The film was nominated for a total of eight Oscars and it went on to win three. More importantly, THE TOWERING INFERNO would become the father of all future disaster movies, and as a young teenager I became engrossed with the actors in this all-star movie from Steve McQueen and Paul Newman to William Holden and Robert Wagner. Even though it is a tragic movie, as most disaster movies are, the film is good clean fun to watch on a lazy Sunday...