THE CHILDREN OF JOAN CRAWFORD 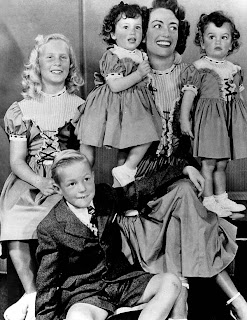 While watching the movie MOMMIE DEAREST (1981) last night, a movie so bad that it was good, I started wondering what happened to the children of Joan Crawford. She adopted a total of four children, and whether or not there was any truth to MOMMIE DEAREST, Crawford did do a lot for the plight of orphans in this country in the 1940s or so it appeared.

Christina Crawford was born in Los Angeles California on June 1, 1939 out of wedlock to a teenage mother and a father who was in the Navy. Joan adopted Christina, in early 1940, before she was one-year-old. Joan at the time was a single woman and she had originally named Christina - Joan Crawford Jr. Thankfully Joan changed her daughter's name to Christina - there was only one Joan Crawford, and Joan wanted the whole world to know that

Christina and Joan Crawford never had a warm relationship but in the later part of 1968, they appeared on television for a fund raiser and seemed to have patched up their differences and were seen together laughing and enjoying each other's company. It was the last time Christina would see her mother Joan Crawford alive. 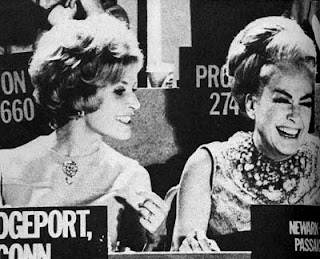 In 1977, Joan Crawford died on May 10th of what was reported as "acute coronary occlusion," but the actual cause of her death was liver cancer. After Joan's death her will - which was last revised on October 28th 1976 -was read and a harsh reality was dealt to Christina Crawford. Joan's will stated... "It is my intention to make no provision herein for my son Christopher or my daughter Christina for reasons which are well known to them." Christina contested the will and received $27,500. This naturally sparked retaliation from Christina and the book "Mommie Dearest" was born soon after Joan's death in 1978. The book was a best seller and raised awareness about child abuse across the nation. When Christina initiated a movie with her second husband David Koontz (married 1976-divorced 1982) Christina's credibility was challenged. The movie "Mommie Dearest" was released in 1981 and was so over the top and exaggerated that many questioned the "truth" about Christina's allegations. The movie went on to be voted the worst movie of 1981 and was awarded a Razzie Award in 1982 for the worst movie of 1981. "Mommie Dearest" also won a Razzie Award for Worst Film of the 1980s.

In 1981, Christina suffered a near fatal stroke that took her five years to recover from. After her recovery from her stroke and her divorce, she moved to the Northwest and ran a bed and breakfast called Seven Springs Farms in Sanders, Idaho with her third husband Michael Brazzel, from 1994- 1999.

Currently, Christina Crawford, who is single, works as a Special Events Manager at the Coeur d'Alene Casino in Idaho. Christina never had any children of her own. Christina recently has appeared on several Joan Crawford documentaries over the past several years.

While it is not known if Joan Crawford was as abusive as Christina said, it is also not known that she was not that abusive. The public just does not know either way. 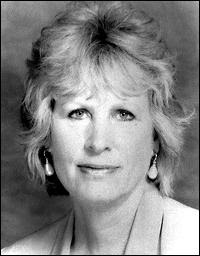 Phillip Terry Jr. was born on October 15, 1943 and was adopted by both Joan Crawford and her then husband Phillip Terry in 1943. After Joan divorced Terry in 1946, Crawford changed her sons name to Christopher Crawford. Christopher Crawford was a quiet child, but became defiant at home when he found out he was adopted. Christopher became difficult and defiant at home, he was labeled as a "problem child" by many schools that he was kicked out of. Christopher ran away from home on many occasions, searching for his "real" mother and father. Christopher admitted later in life he was a "brat" as a child and "difficult."

Christopher waived any rights to the book and movie, "Mommie Dearest" for $10,000. Christopher was also left out of Joan Crawford's will. Christopher contested the will and received $27,500. Christopher Crawford did visit his sister Christina in the 1990s at her bed and breakfast in Idaho on a few occasions.

Christopher Crawford died of cancer on September 22, 2006, at approximately 10:50 am, at the Eastern Long Island Hospital in Greenport, New York. Christopher was 62 years old when he died. 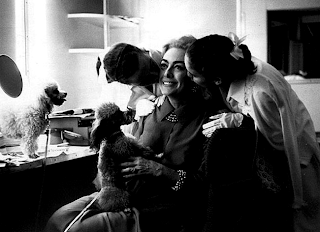 In 1960, both Cathy and Cynthia moved to New York City with Joan Crawford after Joan's fourth husband, Al Steele, died.

Cynthia Crawford was in boarding school from age eight and eventually attended Dubuque University. It was at Dubuque University where she met her husband and became pregnant with her first child. In 1967, at 20 years of age, married Mr. Jordan and moved into a trailer in Dubuque, Iowa. They had two children together - Jan and Joel. In 1976, Cynthia divorced her husband after nine years of marriage. After Joan's death in 1977, Cynthia worked in a show store earning $150.00 a week and living off of the $ 77,000 inheritance from Crawford's estate. Cynthia moved to Jackson, Miss., in 1984, but the work played out after six months, leaving her on welfare and without a place to live. She worked and saved until she had enough money for an apartment. In 1990 Cynthia, now living in Brandon, Miss., found her biological father in Friendship, Tennessee. Ironically, her father's last name was Jordan - the same last name as her ex-husband. In 1991, Cynthia moved to Memphis, Tennessee to be closer to her biological family and often visited her dad.

Sadly, Cynthia Crawford died on October 14, 2007 at the age of 60 in Tennessee. Cynthia had been dealing with a hepatitis infection and was in process for a liver transplant. She leaves a wonderful loving family, which consisted of her sons and several grandchildren. Cynthia never had contact with Christina or Christopher after Joan's death.

Cathy Crawford was in boarding school from age eight. Cathy also attended Vernon Court Junior College and eventually attended the Fashion Institute of Technology in the 1960s. Cathy Crawford and Jerome LaLonde married on August 10, 1968. They met in Alexandria Bay, New York. Jerome was in active duty in the Navy when they married. After the wedding and honeymoon, they moved to Norfolk, Virginia and stayed there until Jerome's enlistment was up. They moved back to Alexandria Bay, New York where Cathy had two children Carla and Casey. Shortly after their second child, Casey, was born the family moved to Allentown, Pennsylvania in 1972.

After Joan''s death in 1977, Cathy received $ 77,000 inheritance from Crawford's estate wand all inherited all of Joan Crawford's property including the 1946 Oscar for "Mildred Pierce." Jerome LaLonde and Cathy (Crawford) LaLonde separated in 1984. Cathy reconnected with her biological father via telephone in 1991. Cathy worked as a teacher's aide in Pennsylvania for most of the 1990s. In 1993, Cathy decided to sell Joan's Academy Award at auction.

Cathy currently resides in Pennsylvania. Cathy never had contact with Christopher after Joan's death and currently has not had any contact with Christina. Cathy's son, Casey, currently is involved with repairing his grandmother's image and answers letters from fans on this website under the "Ask Casey" page. 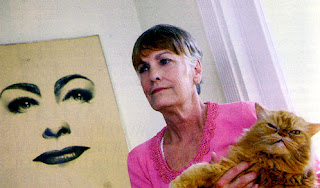 source
Posted by David Lobosco at 5:48 AM