BAD CINEMA: VILLAGE OF THE GIANTS 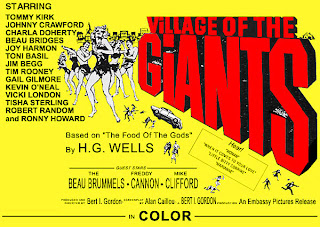 Last night not much was on television, so my go-to channel is always Turner Classic Movies. They had a movie I had never seen before, and it was so awful I could not turn away. It was amazingly bad. The movie was called Village Of The Giants.

Village of the Giants is a 1965 science-fiction/comedy movie with many elements of the beach party film genre. It was produced, directed and written by Bert I. Gordon, and based loosely on H.G. Wells's book The Food of the Gods. The story revolves mostly around a chemical substance called "Goo", which causes giant growth in living things, and what happens after a gang of rebellious youngsters get their hands on it. The cast was mostly teens, or young actors playing teens, and The Beau Brummels and Freddy Cannon make musical guest appearances.

The movie was a low-budget exploitation film and not a huge hit (released mostly to drive-ins as part of a double bill), but had some notable use of special effects and undoubted sex appeal, and went on to become a cult classic. The movie proved far more successful years later, when released on home video.

The movie's instrumental theme song, by composer and arranger Jack Nitzsche, was originally released as "The Last Race" on Reprise Records, months before the movie appeared.

The Beau Brummels, singers Freddy Cannon and Mike Clifford all make appearances. Cannon enjoyed a string of hits during the Sixties (including "Palisades Park" and "Tallahassee Lassie"), and performs "Little Bitty Corrine" in his signature style (wearing a cardigan sweater in the summertime!), while Mike Clifford (veteran of The Ed Sullivan Show, and later an actor) croons the movie's obligatory slow song, "Marianne". (Clifford is also credited with another song, "Nothing can Stand in my Way", but this does not appear in the film). There was no official soundtrack release for this movie. 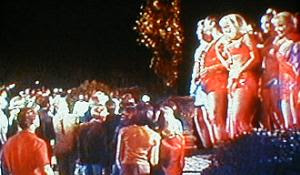 Debi Storm completed her role as the Sheriff's daughter in just three days. Vicki London, who played Georgette, is absent from the screen for most of the giant scenes in the movie. Robert Random and Joy Harmon each also appeared in episodes of Gidget, which debuted in the fall of 1965. (Their height remained normal.) Other notable cast members include Beau Bridges (big brother of Jeff Bridges, son of "Seahunt" and "Airplane" Lloyd Bridges and an A-list actor in his own right), "Ronny" Howard, Academy Award winning director, actor and producer, Johnny Crawford (Chuck Connors son in "The Rifleman)and Toni Basil, choreographer (The Lockers), dancer, actress and one hit wonder ("Ricky").

The cat appearing in this film was named Orangey (later renamed Minerva), and Village of the Giants was the second time he played the role of a cat larger than a human, the first being Scott Carey's (actor Grant Williams) pet in The Incredible Shrinking Man (1957). His most famous roles were as "Rhubarb" in the film Rhubarb (1951) and the cat in Breakfast at Tiffany's (1961).

In January 1994, Village of the Giants was featured as an episode of Mystery Science Theater 3000 (episode 523). The episode was dedicated in memoriam to the recently deceased Frank Zappa.

I can't believe I watched the whole movie, but I did. I actually recommend this movie to anyone who wants to say they saw one of the worst movies of all time...