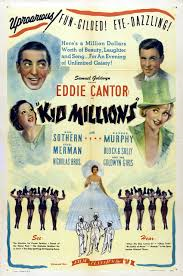 It is very hard to find Eddie Cantor movies on DVD. It is sad but he had such a wonderful talent that is being lost in the passages of time. So, I was overjoyed when I saw that 1934's Kid Millions was being released on DVD. I had not seen the film in over ten years, but the forgotten film is still pretty enjoyable. The film not only boasts Eddie Cantor performing great numbers like "Mandy", "Okay Toots", and "When My Ship Comes In", but the film also showcases the early screen appearances of George Murphy, Ann Southern, and the super talented Nicholas Brothers.

In New York City, 1934, we meet jazz singer, Dot Clark, and her shady gangster boyfriend, Louie The Lug ("An Earful of Music"). After having an affair with the deceased Professor Edward Wilson, Dot is now technically his common-law wife and heiress to 77 million dollars. She has to go to Egypt to claim the money, and sets off with Louie in hopes of getting the cash. Former assistant to Edward Wilson, Gerald Lane, informs the law offices of Benton, Loring, and Slade of Professor Wilson's death and the fact that Edward's son, Eddie Wilson Jr is the rightful heir to the money. Mr. Slade, the lawyer, goes to a barge in Brooklyn where Eddie is living with his adopted father, Pops, an old stevedore, and his three sons, Oscar, Adolph, and Herman, who roughhouse Eddie.

However, Eddie is managing to live a nice life nonetheless, with his girlfriend, Nora 'Toots', and his care for all the kids on the barge. He dreams of the day when he will have enough money to live his own life outside of the dirty barge ("When My Ship Comes In"). Moments later, Eddie is informed that he has inherited the 77 million dollars and boards a ship bound for Egypt to claim the money. Aboard the ship, we meet Colonel Henry Larrabee, a gentleman from Virginia who sponsored Eddie Sr's exploration endeavors and wants a share of the money as well. Eddie befriends his beautiful niece, Joan, and Dot and Louie realize that they are not the only ones traveling to Egypt. In an elaborate scheme to trick Eddie into signing over the inheritance, Dot disguises herself as Eddie's mother and almost succeeds in duping him but Louie ruins the plan at the last minute. Meanwhile, Gerald Lane has boarded the ship and we see that he is in love with Joan Larrabee. 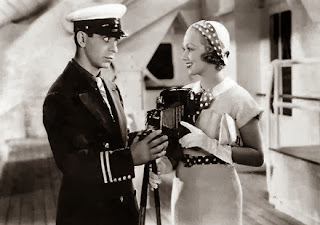 In the ship's bar, the Colonel, Gerald, and Louie realize they are all traveling for the same reason, and Gerald calls Colonel Larrabee a liar. Joan overhears and becomes angry with him, much to Jerry's dismay. Louie tries to get Eddie to hand over the cash by trying to bump him off by pushing him off the ship's deck in a wheelchair. The duo thinks they have succeeded in getting rid of Eddie, but they are foiled again. Eddie tries to help Jerry win back Joan, and suggests they rehearse a number for the ship's concert the next evening. They rehearse ("Your Head On My Shoulder"), but Joan is still frosty toward him. At the ship's concert, Jerry, Eddie, Dot, Joan, and members of the chorus perform a big minstrel show number featuring a specialty tap by the Nicholas Brothers ("Mandy N' Me"). The ship lands in Alexandria, Egypt, and we see that Joan is still angry with Jerry. Eddie, still convinced that Dot is his mother and Louie is his uncle, wants to see a magician performing at the ship's port. When the magician taunts Louie and calls him a coward, Louie gets in the magic basket and ends up getting beaten by Egyptian slaves. Eddie chases a little dog running through the marketplace and lands literally in the lap of the sheikh's daughter, Princess Fanya, who falls instantly in love with Eddie. She forces him to come with her back to the palace, where Eddie meets her father, Sheikh Mulhulla, and her fiancé, Ben Ali, who is extremely jealous. Fanya hyperbolizes the encounter with the dog, saying that Eddie saved her from a lion's attack instead of a puppy.

Eddie then is invited to stay at the palace, much to Fanya's delight. However, soon Sheikh Mulhulla learns of the Americans being in Egypt who have come to take the 77 million dollar treasure that he believes is rightfully his. He tells Eddie about this and Eddie begins to worry about his mother and his uncle, along with the others. In a comical scene, the Sheikh and Eddie smoke a hookah pipe and the Sheikh tells him of the affair he is having with a famous dancer who lives in the village. The harem women try to seduce Eddie, but he is steadfast to remain faithful to Nora 'Toots' ("Okay Toots"). Princess Fanya has a plot to get Eddie to marry her and she tells her father that Eddie kissed her on the camel when they first met. The Sheikh then decrees that Eddie must marry Fanya or die, and has him suspended over a large bowl of soup. Eddie then agrees to marry Fanya, and is kept in a room on a dog collar until the next morning, when Ben Ali comes in with a gun in a jealous rage. 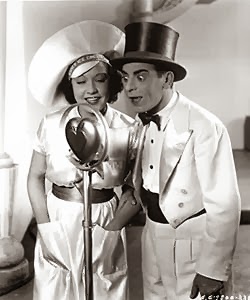 Eddie convinces Ben Ali that he does not want to marry Fanya, and Ben Ali is convinced and lets him go. However, Joan, Jerry, the Colonel, Dot, and Louie arrive at the palace and are immediately accosted by the guards. In the tomb, Eddie and the men disguise themselves as the spirits of the Sheikh's ancestors and tell him to let the Americans go free. The Sheikh is so scared by the prophecies, he agrees to let them go on one condition: Eddie will never be able to see Fanya ever again. He agrees and boards a plane home to New York City, where he uses the 77 million dollar inheritance to open a free ice cream factory with Toots, thus realizing their lifelong dream ("Ice Cream Fantasy Finale").

It was kind of creepy the gags about Ethel Merman ticking her "son" Eddie Cantor, and the movies never seemed to find a place for Ethel Merman. However, she was enjoyable in her big number "An Earful Of Music". The film's "ice cream fantasy sequence" was Goldwyn's first attempt at film with three-strip Technicolor. The cast of Our Gang appear among the children in this sequence. This movie by far had the biggest budget of any Eddie Cantor movie up until that time, and it made the most money. If you like Eddie Cantor, then you have to see this movie, because watching this movie is like meeting up with an old friend... 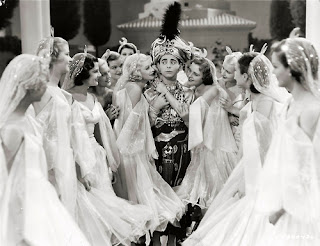 Posted by David Lobosco at 6:22 AM