I always like to hear that when a fan meets a celebrity and has a good experience. When I was younger I was in awe of celebrities and nervous if I met one. However, as I get older I have realized that these famous people are just people too. Here are some experiences "common" people have had with celebrities - good and bad!

THESE ARE EXPERIENCES OTHER PEOPLE HAVE HAD WITH THE STARS. THEY SENT ME IN THEIR EXPERIENCES AND STORIES. THESE STORIES ARE NOT MINE: 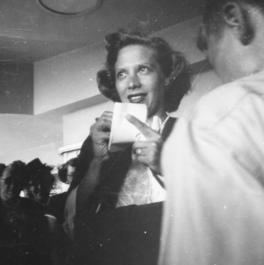 Dinah Shore - I had a friend at the time who was cataloging all of her film and TV appearances. He worked out of her house on Oxford in Beverly Hills and she had film and video cases scattered all through the house. He had nothing but great things to say about her.

Jimmy Stewart - a friend of mine sent Stewart a case of apples one fall from Wenatchee, Washington and got a very nice personal letter back from Stewart. So a year later he knocks on Jimmy's door and the housekeeper answers. She freaks out a little but asks him to wait and closes the door. Ten minutes later Jimmy opens the door and not only remembers the gift, but his name too. They spoke for about 5 minutes and my friend says he just reeked of class.

Met the Queen of Broadway, Bernadette Peters, at the stage door after seeing her on Broadway in "Gypsy" a couple of years ago--she was so charming (even when obviously exhausted). Not only did she autograph everything we had, she also let us take a few pics with her and even reminded me to remove my hand from in front of the shutter of my camera (I was a bit nervous)! AND--she stayed there until every autograph had been signed, every picture had been taken--what a pro! LOVE her! 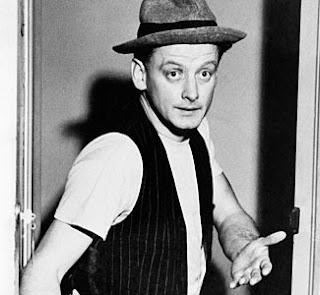 One celebrity was Art Carney. I sat right next to him on a flight from Boston to Fort Myers, FL back in 1978. Long story short (again), half way through the flight, he asked me about Fort Myers to which I told him that I had never been before so sorry, but couldn't help him. I did not know who he even was until his supposed 'wife' (short, heavy red-headed woman who sat BEHIND us???) tapped me on the shoulder and told me who I was sitting with. So, of course, knowing that celebs don't like to be fussed over (ahem!), I asked for an autograph and he said 'sure' as long as I didn't tell anybody on the plane that he was on it. I was 19...I didn't say a word.

I met June Lockhart from Lassie and Lost in Space fame She attends NASA parties here in Houston. Anyway, she is very friendly. I saw her in the Space Center gift shop talking with one of the very young employees who had no idea who she was. June made sure she introduced herself to the employee several times.

Only one experience to relate...I met Harriet Nelson once. She was, believe it or not, taking a tour of the Queen Mary in Long Beach and during a break, sat down beside me. She was very sweet, very glad that people remembered her, but did seem to be a little bit "slow". She signed an autograph for my sister, and spelled my sister's name (Jane)incorrectly. She tried to erase it with the end of the pen (no eraser) and then wet her finger and tried to wipe the incorrect letters off. This was in September before Ricky died on New Years Eve - 1985 I think. 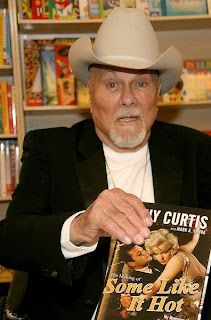 I met Tony Curtis in St. Croix years ago. He stuck out like a sore thumb. He was wearing an all-black leather outfit with a big black cowboy hat and it was very hot and humid. If he was wearing anything else, I probably wouldn't have noticed him. But yes, he was very kind and allowed us to take a picture.

Tina Louise-a book signing near my home. A children's book. In her little speech said it took her 10 years to write it! It's a 10-12 page book in the vein of Go Spot Go. Geez. We had to buy the book (donated it to my elementary school) for her to sign. Took our Gilligan's Island DVD's. Assistant saw us with them & said she wouldn't sign anything but the book. I was going to leave it, but my hubby showed them to her and said, "I guess you hate even looking at these, right?" jokingly. She said " Well, I just like looking at my book more." When we said we still watch the DVD's all the time, she just said, "Really?" very bored and dismissive like. No one would be buying her dumb book if it wasn't for Gilligan. Bad skin & hair, too.

Dad was a training sergeant during WWII and never made it overseas because of bad eyes - as a result, he trained countless soldiers during his 4 years of service - was stationed in Fort Sam Houston TX and was sitting having coffee when some guy comes in and sits down - not in uniform - middle aged with a "mop of hair" (in those days it was unusual for men to have a lot of hair). At any rate my Dad and this guy get talking for about 30 minutes about usual BS and then my father says: gee, I'm from Massachusetts but it seems like I have met you before: the guy says, you may have seen me at the movies: short story, it was Harpo Marx! Hell of a guy according to my Dad - no aires, signed his autograph to send back home to my Dad's parents; told him in he was in town for a USO tour and if my Dad ever made it out to LA to look him up (he never did go) and he'd buy him a beer. In short, a very nice guy to an unknown soldier.

IF YOU HAVE ANY CELEBRITY ENCOUNTTERS THAT YOU WOULD LIKE TO SHARE, PLEASE SEND THEM TO MY EMAIL: DLOBO74@GMAIL.COM, AND I WILL PUT THEM INTO A FOLLOW UP ARTICLE.

SOURCE
Posted by David Lobosco at 7:07 AM