FORGOTTEN FILMS: NOTHING IN COMMON 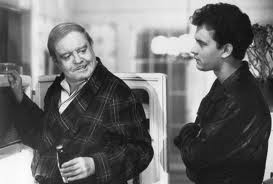 Normally I would not spotlight a film that was made as recent as 1986, however Nothing In Common does star great classic Hollywood stars like Jackie Gleason and Eva Marie Saint. It is an underrated favorite movie of mine.

The film, released in 1986, was not a great financial success, but it became more popular as Hanks's fame grew. It is considered by some to be a pivotal role in Hanks's career because it marked his transition from less developed comedic roles to becoming a leading actor in more serious stories, while many critics also praised Gleason's performance, which was his last movie. The original music score was composed by Patrick Leonard. The film was marketed with the tagline "On his way up the corporate ladder, David Basner confronts his greatest challenge: his father."

Happy-go-lucky advertising executive David Basner, who recently got a promotion at his Chicago ad agency, returns to work from a vacation. He is utterly carefree until his parents split up after 36 years of marriage.

Out of the blue, he must care for his aging, bitter father Max (played by Gleason), as well as be there for his emotionally fragile mother, Lorraine (played by Eva Marie Saint). To add insult to injury, Max has just been fired from his 35-year career in the garment industry.

At work, David is developing a commercial for Colonial Airlines, owned by the rich and eccentric Andrew Woolridge. A successful ad campaign would likely promote David to partner in his company. David develops a relationship with Woolridge's daughter, no-nonsense Cheryl Ann Wayne. His father is well aware of David's playboy nature. Asking at one point if his son is in bed with a woman, Max adds: "Anybody you know?"

The parents begin to rely more and more on David, calling him on the phone constantly. His mother needs help moving to a new apartment. His father needs to be driven to an eye doctor. Lorraine needs to be rescued in a bar after going out on a date with another man, having become frightened when he tried to kiss her goodnight.

David's mother then confides to him that Max cheated on her and humiliated her. An enraged David goes to confront Max. Their argument ends with David saying: "Tomorrow I'm shooting a commercial about a family who loves each other, who cares about each other. I'm fakin' it."

The next day, David is distracted by the deteriorating relationship with his dad and it affects his work. As a peace offering, David offers to take Max to a nightclub to hear some of the jazz music Max likes. It is there that David accidentally discovers a secret Max has been hiding: diabetes. His foot is gangrened. 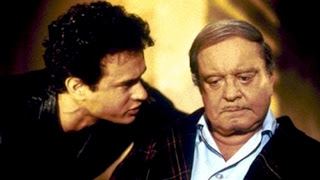 Max must go to the hospital. While awaiting surgery, he and Lorraine share their thoughts about their life together, with Lorraine condemning him for doing what he did to himself and to her. Max sobs over his mistakes once he is alone.

At the agency, Andrew Woolridge insists that David go to New York with him to promote his new ad campaign. David refuses, saying he wants to stay with his sick father. Woolridge complains that it's unnecessary. David tells him off and is fired.

The next day, David accompanies his dad to the operating room. His boss Charlie assures him that he will personally smooth things over with Woolridge, so David should take some time off.

Max loses two toes. When he goes home from the hospital, David pushes his wheelchair. Max admits to his son: "You were the last person I thought would come through for me."

Even though I consider this film forgotten and underrated, it is available on DVD...

Posted by David Lobosco at 8:44 AM