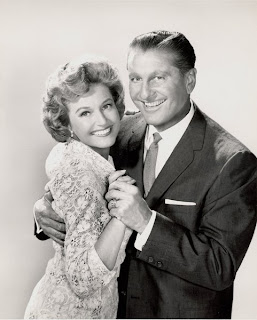 Known to many as the “Champagne Lady” and for years the premiere female singer on the “Lawrence Welk Show”; soprano Norma Zimmer died peacefully at her home in Brea, California on Tuesday, May 10 at the age of 87.

She was born Norma Beatrice Larsen on a dairy farm in Larsen, Idaho on July 13, 1923; the daughter of a violin teacher. The family moved to Seattle when Zimmer was five years old. Zimmer married husband Randy Zimmer in 1945 and remained with him until his death in 2008. The couple had two sons Mark and Ron.

Prior to joining Lawrence Welk, Zimmer was a background singer in Hollywood. For over 10 years, Zimmer lent her voice to the music of Frank Frank Sinatra, Judy Garland,Dale Evans, and Gordon Jenkins including the massive holiday hit song “White Christmas”. From New Year’s Eve in 1960 to 1982, when the show went off the air, Zimmer was a part of the “Lawrence Welk” television show as Welk’s lead female singer. Welk was also known to Waltz around the floor with Zimmer. A devout Christian, Zimmer performed at crusades held by popular evangelist Billy Graham.

Besides her 20 plus years as a part of “The Lawrence Welk Show”, Zimmer has appeared as the singer for “3:10 to Yuma” for the 1957 “3:10 to Yuma”, as one of the townspeople in “Lucy Goes to Scotland” on “I Love Lucy”, was uncredited as one of the chourus girls in “Singin’ in the Rain”, as the uncredited voice of White Rose in the 1951 version of “Alice in Wonderland”, sang with Bing Crosby in “Mr. Music”, and in the television series “The Meredith Wilson Show”.

"The Lawrence Welk Show" holds the record as the "longest-running, musical-variety weekly series on national television." It premiered on KTLA in Los Angeles in 1950, then moved to ABC where it aired from 1955 to 1971.

In 1971, Lawrence Welk took it into syndication until 1982 when he retired. In 1987, the show was picked up by the Oklahoma Educational Television Authority. It celebrates its 25th year on public TV starting in September.

Zimmer is survived by her sons.
Posted by David Lobosco at 3:45 AM