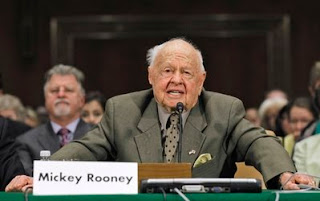 Mickey Rooney spoke out against elder abuse before a senate committee on aging today. The 90-year-old actor has been the alleged victim of abuse at the hands of his own stepkids, according to court documents.

"Unfortunately, I'm testifying by the committee today not just as a concerned citizen, which we all should be, but as a victim of older abuse -- elder abuse, myself," Rooney said. "For years I suffered silently, unable to muster the courage to seek the help that I knew I needed. Even when I tried to speak up, I was silenced. It seemed like no one believed me. But I never gave up."

Rooney, 90, who has had one of the longest careers of any actor, filed a case against stepson Chris Aber and stepdaughter Christina Aber last month charging verbal, emotional and financial abuse, and alleging that they denied him such basic necessities as food and medicine.

"In my case, I was eventually and completely stripped of the ability to make even the most basic decisions -- where we go or what we do. Decisions that everyone likes to make over the course of time my daily life became... unbearable," Rooney said. 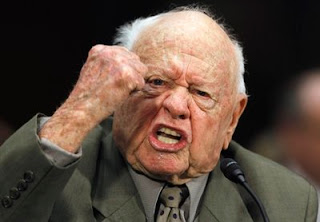 The goal of the senate hearing, entitled "Justice for All: Ending Elder Abuse, Neglect and Financial Exploitation," is to draw attention to the widely underreported problem and coordinate federal, state and local efforts to combat it.

"It's a really sad but important issue and Mr. Rooney is definitely lending his star power to it," committee spokesman Joe Bonfiglio said.

Rooney said he hopes his testimony will encourage other victims to stand up for themselves.

"To those seniors and especially elderly veterans -- Army, Navy, Marine -- you veterans like myself I want to tell you this: You're not alone and you have nothing nothing, ladies and gentlemen, to be ashamed of," Rooney said. "You deserve, yes you deserve better. You all have the right to control your own life."

The court documents say that both Chris and Christina Aber have been keeping Rooney as "effectively a prisoner in his own home" through the use of threats, intimidation and harassment. Christina Aber has also been accused of taking control over Rooney's finances, blocking access to his mail and forcing the actor into performances he does not wish to do.

"Sometimes the transition from being in control of your life to having absolutely no control is swift, but other times it is so gradual that you wonder exactly when it truly began," Rooney said. "In my case, I was eventually stripped of my ability to make even the most basic decisions in my own life."

Rooney was granted temporary restraining orders on Feb. 15, but will have to appear in court on April 5 if he wants them extended for three years. A Los Angeles Superior Court Judge also appointed a temporary conservator of Rooney's estate.