Here is the final part of our three part series on the life and talent of the great Buster Keaton...

Keaton signed with MGM in 1928, a business decision that he would later call the worst of his life. He realized too late that the studio system MGM represented would severely limit his creative input. For instance, the studio refused his request to make his early project, Spite Marriage, as a sound film and after the studio converted, he was obliged to adhere to dialogue-laden scripts.

For the first time, Keaton was forced to use a stunt double during some of the more dangerous scenes, as MGM wanted badly to protect its investment. He also stopped directing, but continued to perform and made some of his most financially successful films for the studio. MGM tried teaming the laconic Keaton with the rambunctious Jimmy Durante in a series of films, The Passionate Plumber, Speak Easily, and What! No Beer? The latter would be Keaton's last starring feature. The films proved popular. (Thirty years later, both Keaton and Durante had cameo parts in It's a Mad Mad Mad Mad World.)

In the first Keaton pictures with sound, he and his fellow actors would shoot each scene three times: one in English, one in Spanish, and one in either French or German. The actors would phonetically memorize the foreign-language scripts a few lines at time and shoot immediately after. This is discussed in the TCM documentary Buster Keaton: So Funny it Hurt, with Keaton complaining about having to shoot lousy movies not just once, but three times. His stage name in Spanish markets was Pamplinas ("Nonsense"), and his nickname was Cara de palo ("Wooden face").

Behind the scenes, Keaton's world was in chaos, with divorce proceedings and alcoholism contributing to production delays and unpleasant incidents at the studio. Keaton was so depleted during the production of 1933's What! No Beer? that MGM released him after the filming was complete, despite the movie being a resounding hit. In 1934, Keaton accepted an offer to make an independent film in Paris, Le Roi des Champs-Élysées. During this period, he made one other film in Europe, The Invader (released in America as An Old Spanish Custom in 1936).

In 1939, Columbia Pictures hired Keaton to star in ten two-reel comedies, running for two years. The director was usually Jules White, whose emphasis on slapstick made most of these films resemble White's Three Stooges comedies. Keaton's personal favorite was the series' debut entry, Pest from the West, a shorter, tighter remake of Keaton's little-viewed 1935 feature The Invader; it was directed not by White but by Mack Sennett veteran Del Lord. Moviegoers and exhibitors welcomed Keaton's Columbia comedies, proving that the comedian had not lost his appeal. However, taken as a whole, Keaton's Columbia shorts rank as the worst comedies he made, an assessment he concurred with in his autobiography. The final entry was She's Oil Mine, and Keaton swore he would never again "make another crummy two-reeler." He stuck to his word, and the Columbia entries would be his final starring series for any movie studio.

Keaton's personal life had stabilized with his 1940 marriage, and now he was taking life a little easier, abandoning Columbia for the less strenuous field of feature films. Throughout the 1940s, Keaton played character roles in both "A" and "B" features. Critics rediscovered Keaton in 1949 and producers occasionally hired him for bigger "prestige" pictures. He had cameos in such films as In the Good Old Summertime, Sunset Boulevard (1950), Around the World in Eighty Days, and It's a Mad, Mad, Mad, Mad World. Keaton was given more screen time in A Funny Thing Happened on the Way to the Forum (1966). He also appeared in a comedy routine about two inept stage musicians in Charlie Chaplin's Limelight (1952), recalling the vaudeville of The Playhouse. With the exception of Seeing Stars, a minor publicity film produced in 1922, Limelight was the only time in which the two would ever appear together on film.

In 1960, Keaton returned to MGM for the final time, playing a lion tamer in a 1960 adaptation of Mark Twain's The Adventures of Huckleberry Finn. Much of the film was shot on location on the Sacramento River, which doubled for the Mississippi River setting of Twain's original book.[31]

In 1961, he starred in The Twilight Zone episode "Once Upon a Time", which included both silent and sound sequences. Keaton played time traveler Mulligan, who traveled from 1890 to 1960, then back, by means of a special helmet. 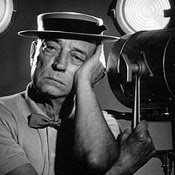 Keaton also found steady work as an actor in TV commercials, including a popular series of silent ads for Simon Pure Beer in which he revisited some of the gags from his silent film days. In 1963, Keaton appeared in the episode "Think Mink" of ABC's Mr. Smith Goes to Washington sitcom, starring Fess Parker

In 1964, Keaton appeared with Joan Blondell and Joe E. Brown in the final episode of ABC's circus drama, The Greatest Show on Earth, starring Jack Palance. That same year, he appeared on Lucille Ball's CBS television show, The Lucy Show, in an episode ("A Day in the Park") filmed in color but initially televised in black and white; this featured him sitting on a park bench, reading a newspaper, which he gradually unfolded into a huge, single sheet. Harvey Korman played a policeman in the scene.

At the age of 70, Keaton suggested that, for his appearance in the 1965 film Sergeant Deadhead, he run past the end of a firehose into a six-foot-high flip and crash. When director Norman Taurog balked, expressing concerns for Keaton's health, Keaton said, "I won't hurt myself, Norm, I've done it for years!" Keaton also starred in three other movies for American International Pictures (Beach Blanket Bingo, Pajama Party, and How to Stuff a Wild Bikini).

Keaton starred in a short film called The Railrodder (1965) for the National Film Board of Canada. Wearing his traditional porkpie hat, he travelled from one end of Canada to the other on a motorized handcar, performing gags similar to those in films he made 50 years before. The film is also notable for being Keaton's last silent screen performance. The Railrodder was made in tandem with a behind-the-scenes documentary about Keaton's life and times, called Buster Keaton Rides Again, also made for the National Film Board. He played the central role in Samuel Beckett's Film (1965), directed by Alan Schneider. In 1966, he played a secondary role in Due Marines e un Generale in Italy. Keaton's last film appearance was in A Funny Thing Happened on the Way to the Forum (1966). He amazed the cast and crew by doing many of his own stunts, although Thames Television said his ill health did force the use of a stunt double for some scenes.

Keaton died of lung cancer on February 1, 1966, in Woodland Hills, California. Despite being diagnosed with the terminal illness in January 1966, he was never told that he was terminally ill, and thought that he had bronchitis. Confined to a hospital during his final days for treatment, Keaton was restless and paced the room endlessly. In a British television documentary on his career, his widow Eleanor told producers of Thames Television that Keaton was up out of bed and moving around, and even played cards with friends who came to visit at their house the day before he died. Eleanor Keaton died in 1998, from emphysema and lung cancer, aged 80.