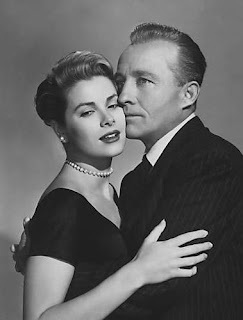 Not only is THE COUNTRY GIRL, released in 1954, one of my favorite dramas, but it is one of my favorite Bing Crosby movies as well. Bing gave the performance of his life in this film. The Country Girl was adapted by George Seaton from a Clifford Odets play of the same name, which tells the story of an alcoholic has-been actor struggling with the one last chance he's been given to resurrect his career. It stars Bing Crosby, Grace Kelly and William Holden. Seaton, who also directed, won the Academy Award for Best Writing, Adapted Screenplay. It was entered in the 1955 Cannes Film Festival.

Kelly won the Oscar for Best Actress for the role, which previously had earned Uta Hagen her first Tony Award in the play's original Broadway production. The role, a non-glamorous departure for Kelly, was as the alcoholic actor's long-suffering wife.

The win was a huge surprise, as most critics and people in the press felt that Judy Garland would win for A Star Is Born. NBC even sent a camera crew to Garland's hospital room, where she was recuperating from the birth to her son, in order to conduct a live interview with her if she won. The win by Kelly instead famously prompted Groucho Marx to send Garland a telegram stating it was "the biggest robbery since Brinks."

Given the period of its production, the film is notable for its realistic, frank dialog and honest treatments of the surreptitious side of alcoholism and post-divorce misogyny.

In a theatre where auditions are being held for a new musical production, the director, Bernie Dodd, watches a number performed by fading star Frank Elgin and suggests he be cast. This is met with strong opposition from Cook, the show's producer.

Bernie insists on the down-on-his-luck Elgin, who is living in a modest apartment with his wife Georgie, a cold and bitter woman who has aged far beyond her years. They are grateful, though not entirely certain Elgin can handle the work.

Based on comments Elgin makes about her privately, Bernie assumes that Georgie is the reason for Frank's career decline. He strongly criticizes her, first behind her back and eventually to her face. What he doesn't know is that the real reason Elgin's career has ended is the death of their five-year-old son Johnny, who was hit by a car while in the care of his father.

Mealy-mouthed to the director's face, Elgin is actually a demanding alcoholic who is totally dependent on his wife. Bernie mistakenly blames her for everything that happens during rehearsals, including Elgin's requests for a dresser and a run-of-the-show contract. He believes Georgie to be suicidal and a drunk, when it is actually Frank who is both.

Humiliated when he learns the truth, Bernie realizes that behind his hatred of Georgie was a strong attraction to her. He kisses her and falls in love.

Elgin succeeds in the role on opening night. Afterward he demands respect from the producer that he and his wife had not been given previously. At a party to celebrate, Bernie believes that now that Elgin has recovered his self-respect and stature, Georgie will be free to leave him. But she stands by her husband instead.
Posted by David Lobosco at 3:25 AM