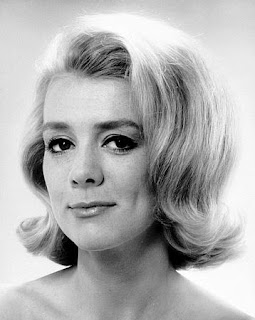 Watching an episode of "The Twilight Zone" this weekend, I was reminded of what a wonderful actress Inger Stevens was. She died way too young in 1970 at the age of 36.Inger Stevens was born Inger Stensland in Stockholm, Sweden. She was an insecure child and often ill.

When she was nine, her parents divorced and she moved with her father to New York City. At age 13, she and her father moved to Manhattan, Kansas, where she attended Manhattan High School. At 16, she worked in burlesque shows in Kansas City. At 18, she left Kansas for New York City. She worked as a chorus girl and in the Garment District while taking classes at the Actors Studio.

Stevens appeared on television series, commercials and in plays, until she got her big break in the movie Man on Fire starring Bing Crosby. Inger would later date Bing, but he would break up with her when she refused to become a Catholic.

Roles in major films followed, but she achieved her greatest success in the ABC television series The Farmer's Daughter, with William Windom. Previously, Stevens appeared in episodes of Bonanza, Route 66, The Alfred Hitchcock Hour, The Eleventh Hour, Sam Benedict and The Twilight Zone.

Following the cancellation of The Farmer's Daughter in 1966, Stevens appeared in such movies as A Guide for the Married Man (1967), with Walter Matthau, Hang 'Em High, with Clint Eastwood, 5 Card Stud, with Dean Martin, and Madigan, with Henry Fonda and Richard Widmark, all in 1968. Stevens was attempting to make a comeback on television with the detective drama series The Most Deadly Game when she died.

Her first husband was her agent, Anthony Soglio, to whom she was married from 1955 to 1957. From 1961 until her death, she was secretly married to Ike Jones, an African-American actor. She was also romantically linked with Bing Crosby, Anthony Quinn, Dean Martin, Clint Eastwood, Harry Belafonte, Mario Lanza, and Burt Reynolds.

On the morning of April 30, 1970, a house guest found Stevens lying face down on her kitchen floor, having overdosed on Tedral (a combination drug of theophylline, ephedrine and phenobarbital, commonly prescribed in the treatment of breathing disorders such as asthma, emphysema, and bronchitis), washed down with alcohol. After an autopsy, her body was cremated and her ashes were scattered over the Pacific Ocean...
Posted by David Lobosco at 12:19 PM