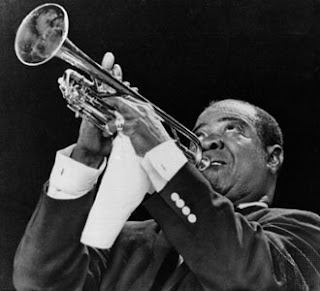 The new year is underway and it should be a terrific one for fans and students of trumpeter - bandleader Louis Armstrong. "The world is more interested than ever in Louis Armstrong," says Michael Cogswell, Director of The Louis Armstrong House Museum in Queens, NY. "That's evident not only from the ever-increasing number of people from around the world who visit our Museum," he reports, "but also from the number of researchers using our archives and the great popularity of recent Armstrong films and books." Because in part of a $105,384, two-year grant from the Museums for America program of the Institute of Museum and Library Services (IMLS), cataloging for the three largest collections at the Armstrong House Museum is already online.By the end of 2011, the entire collection will be included.

"Thanks to the vision and generosity of the Louis Armstrong Educational Foundation, we have been able to build a world-renowned research archives," says Cogswell."And now, thanks to this IMLS grant, our catalog will be online for everyone to peruse and enjoy."

Project Archivist Ricky Riccardi, an Armstrong expert, has spent the past 15 months arranging, preserving, and cataloging more than 200 cubic feet of Armstrong material.

"Working with this collection has been an absolute dream come true, but getting to share it online with other Armstrong lovers from around the world really makes this something special," Riccardi enthuses. "And it's not just for Armstrong experts; the online catalog will appeal to music fans, art historians, 20th-century pop culture buffs, musicians, photographers, you name it. There's something for everyone."

Cogswell adds, "One of our most common reference questions is, ‘What kind of trumpet did Louis Armstrong play?' Now, anybody, anywhere in the world 24/7, can simply go on the web to learn the make, model, and serial numbers and to see photos of Louis's own gold-plated trumpets."

According to publicity, "The Louis Armstrong House Museum holds the world's largest archives devoted to a single jazz musician. Its collections encompass more than 5,000 sound recordings, 15,000 photographs, 30 films, 100 scrapbooks, 20 linear feet of letters and papers, and six trumpets. Researchers, record companies, publishers, film producers, public school students, and many others routinely use these materials. Since 1994, more than a dozen books and recordings have been published based on research from the collections, including Terry Teachout's Pops, a notable book of 2010.

The research core of the archives is the Louis Armstrong Collection, comprising Satchmo's vast personal trove of home-recorded tapes, photographs, scrapbooks, manuscript band parts, and other materials discovered inside his modest house in Corona, Queens, after his wife, Lucille, passed away in 1983. A grant from the Louis Armstrong Educational Foundation made possible the Museum's acquisition of the world's largest private collection of Armstrong material from Jack Bradley, Armstrong's friend and a noted jazz photographer."

The direct link to The Louis Armstrong House Museum's catalog is here
Posted by David Lobosco at 12:37 PM