BORN ON THIS DAY: RAY BOLGER 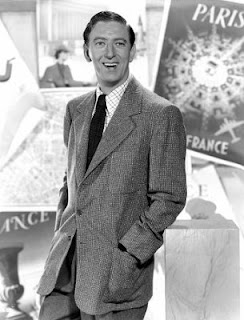 Today marks the birthday of the Scarecrow from THE WIZARD OF OZ (1939), Ray Bolger. Bolger was born Raymond Wallace Bolger on January 10,1904 to an Irish Catholic family in Dorchester, a section of Boston, Massachusetts, the son of Anne (née Wallace) and James Edward Bolger. He was inspired by the vaudeville shows he attended when he was young to become an entertainer himself.

He began his career in a vaudeville tab show, creating the act "Sanford & Bolger" with his dance partner. In 1926, he danced at New York City's Palace Theatre, the top vaudeville theatre in the country. His limber body and ability to ad lib movement won him many starring roles on Broadway in the 1930s. Eventually, his career would also encompass film, television and nightclub work.

Bolger's film career began when he signed a contract with MGM in 1936. His best-known film appearance prior to The Wizard of Oz was The Great Ziegfeld (1936), in which he portrayed himself. But he also appeared in Sweethearts, (1938) the first MGM film in Technicolor, starring Nelson Eddy, Jeanette MacDonald, and Bolger's future Oz co-star, Frank Morgan, as well as the 1937 Eleanor Powell vehicle Rosalie, which also starred Eddy and Morgan.

Bolger toured in the USO shows with Joe E. Lewis in the Pacific Theater during World War II, was featured in the United Artists war-time film Stage Door Canteen (probably the best filmed example of his dancing and comic style that made him such a big Broadway star) and returned to MGM for a featured role in The Harvey Girls (1946).

Following Oz, Bolger moved to RKO. In 1946, he recorded a children's album, The Churkendoose, featuring the story of a misfit fowl ("part chicken, turkey, duck, and goose") who teaches kids that beauty is in the eye of the beholder and it all "depends on how you look at things".

Bolger starred in several films, including Walt Disney's 1961 remake of Babes in Toyland, and his own sitcom, Where's Raymond?, also known as The Ray Bolger Show, from 1953-1955. He also made frequent guest appearances on television, including the episode "Rich Man, Poor Man" of the short-lived The Jean Arthur Show, a CBS sitcom which aired in 1966. In 1985, he and Liza Minnelli, the daughter of his Oz co-star Judy Garland, starred in That's Dancing, a film also written by Jack Haley, Jr., the son of Tin Man actor Jack Haley. He also appeared in Little House On The Prairie as Toby Noe.

Bolger's Broadway credits included Life Begins at 8:40, On Your Toes, By Jupiter, All American, and Where's Charley?, for which he won the Tony Award for Best Performance by a Leading Actor in a Musical and in which he introduced "Once in Love with Amy", the song often connected with him. He repeated his stage role in the 1952 Technicolor film version of the musical. In his later years, he danced in a Dr Pepper television commercial. He had a recurring role as the father of Shirley Partridge (played by Shirley Jones) on The Partridge Family.

Bolger died of bladder cancer on January 15, 1987 in Los Angeles, California, five days after his 83rd birthday. He was interred at Holy Cross Cemetery, Culver City in the Mausoleum, Crypt F2, Block 35. He was survived by his wife of over 57 years, Gwendolyn Rickard. They had no children. At the time of his death, he was the last surviving main cast member of The Wizard of Oz.

An editorial cartoon on January 17, 1987, two days after his death, by Chicago Tribune artist Dick Locher, depicted the Oz cast dancing off into the setting sun and toward the Emerald City, with the Scarecrow running to catch up...
Posted by David Lobosco at 5:19 AM