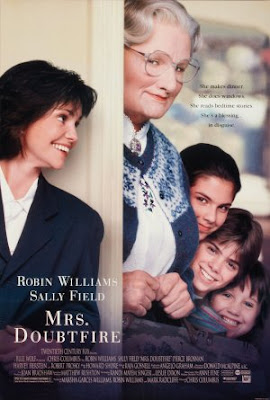 It has been years since I watched the comedy Mrs. Doubtfire. My son and I ran across it on cable, and we watched it together. When I first saw it in the movie theater, it was a couple of years after my own parents' divorce, but I was too young back then to realize what it meant. The movie was full of laughs, but I got the opportunity to explain to my young son what divorce was. Only days before we watched this movie, my son got mad at me and said "I hope Mommy divorces you some day". After watching this film, I do not think he will ever say that again. Also, two years after Robin William's sad death, it seems like every movie he was in - he looked a little bit sad if you look really close. What a talent he was, and this film shows that genius off.

Mrs. Doubtfire is a 1993 American comedy-drama family film directed by Chris Columbus and based on the novel, Alias Madame Doubtfire by Anne Fine. It stars Robin Williams (who also served as co-producer) and Sally Field. It won the Academy Award for Best Makeup and the Golden Globe Award for Best Motion Picture – Musical or Comedy.

Daniel Hillard is a freelance voice actor living in San Francisco, California who quits his job due to a disagreement over a questionable script. Though a devoted and loving father to his three children, Lydia, Chris and Natalie, Daniel is an irresponsible husband. Despite his wife Miranda's objections, Daniel throws a wild birthday party for his son Chris. Miranda becomes furious with him and seeks a divorce. At their first custody hearing, a judge grants Miranda custody of the children, since Daniel has neither a residence nor a job. 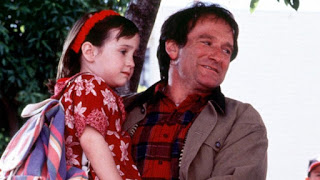 Daniel soon learns that Miranda intends to hire a housekeeper and alters her classifieds form when she declines his offer to take care of the children. He then calls Miranda several times, using his voice acting skills as several female job applicants. He then calls as a Scottish-accented nanny, whom he dubs "Mrs. Euphegenia Doubtfire". Impressed with her alleged qualifications, Miranda invites "Mrs. Doubtfire" for an interview. Daniel enlists his brother Frank, a makeup artist, and his partner Jack to transform him into the character. 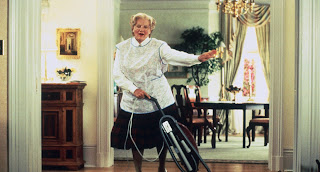 Daniel also takes a job at a TV station. CEO Jonathan Lundy sees Daniel clowning around with toy dinosaurs on the set of an unsuccessful children's program. Impressed with Daniel's creativity, Lundy invites him to dinner at Bridge's Restaurant on the coming Friday night for Daniel to pitch ideas as a new host. Meanwhile, Miranda expects Mrs. Doubtfire to attend a birthday dinner arranged by romantic interest Stu Dunmire scheduled at the same time and place.

Unable to reschedule either appointment, Daniel goes to the restaurant and tries to rotate between both dinners, changing in and out of the Mrs. Doubtfire costume in the restroom. He consumes several alcoholic beverages between the two tables and becomes tipsy. He forgets to change out of the Mrs. Doubtfire costume before returning to Lundy's table and seasons cayenne pepper (which Stu is allergic to) on Stu's food. When Lundy questions the costume, Daniel covers for his mistake by explaining that his alter ego is his idea for a television persona, impressing Lundy. At Miranda's table, Stu starts choking. Realizing his mistake, Daniel administers the Heimlich maneuver. During the struggle, Daniel's mask accidentally rips off, revealing his identity to Miranda's dismay. 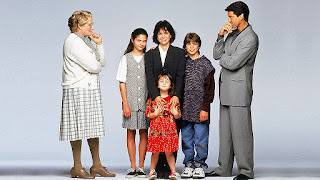 At their next custody hearing, Daniel demonstrates he has a job and a suitable home. However, the judge is disgusted by his actions and grants Miranda full custody, with Daniel limited to supervised visitation once a week. Without Mrs. Doubtfire, the children again become devastated, and even Miranda admits their lives were so much better with "her". Soon they are delighted when they see Daniel dressed as Mrs. Doubtfire hosting his own television program, "Euphegenia's House", which becomes a hit across several American cities. 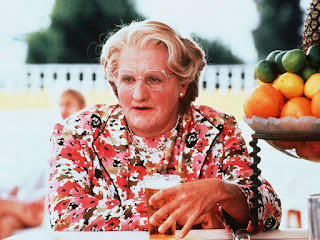 Miranda pays a visit to Daniel after he wraps up one episode. Congratulating him on his success, she admits that things were better when he was involved, so she decides to appeal the custody ruling. Later the children are greeted by Daniel, revealed as their new babysitter, undisguised and without supervision. They head out as Miranda watches a Euphegenia's House episode where Mrs. Doubtfire answers a letter from a little girl whose parents are divorcing, saying no matter what arrangements families have, love will prevail.

I hope my children never have to go through the pain of a divorce like I did, and I do not think they will, but this movie really does a good job of not only making you laugh but also not sugar coating what a divorce does to a family. This film is also an example of why I miss Robin Williams so much... 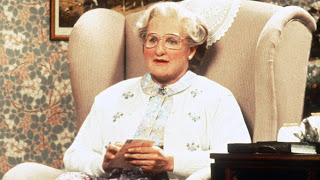