WHAT A CHARACTER: MARJORIE MAIN 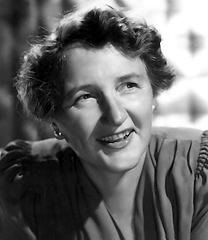 My childhood was not always 100% happy, but any memory I have of watching movies or television at a young brinbs back nothing but fond memories. One of those memories is watching "Ma and Pa Kettle" movies on Sunday morning. The movies series would rotate with other movie series like Abbott and Costello and "Blondie". I never get tired of watching Ma and Pa Kettle, and one of the reasons I loved the series was because of its star Marjorie Main.

Born Mary Tomlinson in Acton, Indiana on February 24, 1890, Main attended Franklin College in Franklin, Indiana, and adopted a stage name to avoid embarrassing her father, Samuel J. Tomlinson (married to Jennie L. McGaughey), who was a minister. She worked in vaudeville on the Chautauqua and Orpheum Circuits, and debuted on Broadway in 1916. Her first film was A House Divided in 1931.

Main began playing upper class dowagers, but was ultimately typecast in abrasive, domineering, salty roles, for which her distinct voice was well suited. She repeated her stage role in Dead End in the 1937 film version, and was subsequently cast repeatedly as the mother of gangsters. She again transferred a strong stage performance, as a dude ranch operator in The Women, to film in 1939. Main was signed to a MGM contract in 1940, and stayed with the studio until the mid-1950s. She made six films with Wallace Beery in the 1940s including Barnacle Bill (1941), Jackass Mail (1942), and Bad Bascomb (1946). She played Sonora Cassidy, the chief cook, in The Harvey Girls (1945). The director, George Sidney, says in the comments on the film that Miss Main was a "great lady" as well as a great actress who donated most of her paychecks over the years to the support of a school.

Perhaps her most famous role is that of "Ma Kettle", which she first played in The Egg and I in 1947 opposite Percy Kilbride as "Pa Kettle". She was nominated for an Academy Award for Best Actress in a Supporting Role for the part and portrayed the character in nine more Ma and Pa Kettle films. 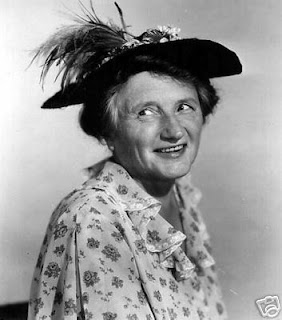 By the early 1950s, she had appeared in a majority of MGM musicals, including, Meet Me in St. Louis, The Belle of New York and It's a Big Country. In 1954, Marjorie Main played her last roles for the studio; Mrs. Hittaway in The Long, Long Trailer and Jane Dunstock in Rose Marie. In 1956, Main was well-received as The Widow Hudspeth in the hit film Friendly Persuasion. In 1958, Main appeared twice as rugged frontierswoman Cassie Tanner in the episodes "The Cassie Tanner Story" and "The Sacramento Story" on NBC's western television series, Wagon Train. In the first segment, she joins the wagon train, casts her romantic interest on Ward Bond as Major Adams, and helps the train locate needed horses despite a Paiute threat. George Chandler guest stars as Cleveland McMasters in the first segment. In 1964, she appreared on an episode of Perry Mason.

Main was married to in 1921 to Stanley LeFevre Krebs, who died in 1935. She never had children or even remarried. In 1974, a year before her death, Main attended the Los Angeles premiere of the MGM compilation film That's Entertainment. It was her first public appearance since she retired from films in 1958. At the post-premiere party, she was greeted with cheers of enthusiasm from the crowd of spectators. However at the time she already was quite ill with cancer. She died of lung cancer on April 10, 1975 at St. Vincent's Hospital in Los Angeles, where she had been admitted on April 3, at the age of 85. Her name is listed on her headstone as Mrs. Mary Tomlinson Krebs, with her stage name Marjorie Main underneath... 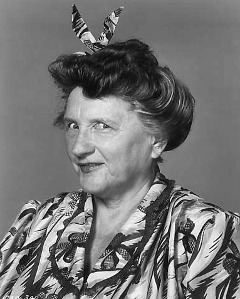 Posted by David Lobosco at 5:58 AM