HISTORY OF A SONG: SKYLARK 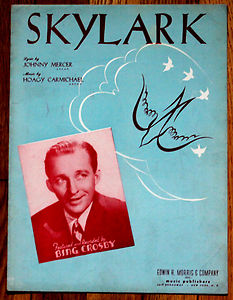 In 1942 “Skylark” appeared on the pop chart four times. The first recording was by Glenn Miller and His Orchestra featuring vocalist Ray Eberle, and it rose to number seven. All told, the hit recordings were:

Hoagy Carmichael originally wrote the composition that would become “Skylark” for a musical about his deceased friend, Bix Beiderbecke. The song’s melody is said to have been based on Beiderbecke solos, at least the phrasing, a claim supported by the composition’s original title, “Bix Lix” (“Bix Licks”). Though the musical did not get produced, Carmichael reworked the composition and passed the melody on to Johnny Mercer who, some months later, called Hoagy and sang him “Skylark.” By that time Carmichael had forgotten he wrote it!

“Skylark” was the second in what Richard Sudhalter in his Carmichael biography Stardust Melody: The Life and Music of Hoagy Carmichael calls Carmichael’s “musical aviary.” First came “Mr. Bluebird” (1935) with lyrics by Carmichael, and finally there was “Baltimore Oriole” (1942) with lyrics by Paul Francis Webster (“I Got It Bad (and That Ain’t Good”).

In his Mercer biography titled Skylark: The Life and Times of Johnny Mercer, Philip Furia explains the yearning expressed in “Skylark” as a voicing of the lyricist’s longing for Judy Garland with whom he had a stormy affair. Mercer told a friend that he wrote “I Remember You” for Garland and that “One for My Baby” (1943) bemoaned her loss.

Johnny Mercer claimed that “Skylark” was not inspired by Percy Bysshe Shelley’s (1792-1822) poem, “To a Skylark,” although the similarities cannot be ignored. Both men were sad geniuses who turned to the skylark for answers: Mercer, with regard to romance queries, “Won’t you tell me where my love can be?” Shelley, with broader concerns, requests, “Teach me half the gladness, That thy brain must know...” 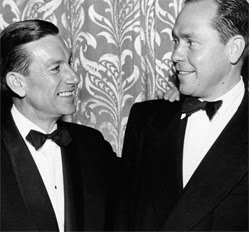 SOURCE
Posted by David Lobosco at 5:40 AM