As a lifelong fans of movie musicals, I have always loved the dancing in movies. Vera-Ellen was never my favorite dancer growing up. (Eleanor Powell was always my favorite.) However as I get older I have come to really appreciate the movies of Vera-Ellen more. Here are my five favorite Vera-Ellen musicals... 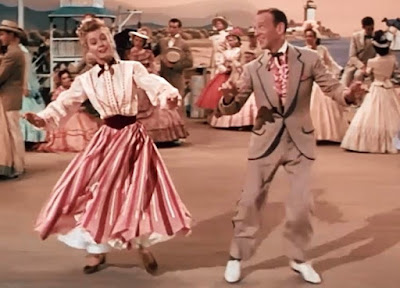 5. THE BELLE OF NEW YORK (1952)
Set in turn-of-the-century New York, wealthy playboy Charles Hill (Fred Astaire) falls in love with Angela (Vera-Ellen) a Salvation Army worker. The plot is slight but the musical numbers are top notch. The highlights was the musical number "Baby Doll" , which was sung by Astaire and danced by Astaire and Vera-Ellen with much emphasis  on twirling motifs and platform work and "Naughty But Nice", which was sung by ghost singer Anita Ellis but danced beautifully by Vera. The film lost money in its initial release, but it is a cute movie.

4. THREE LITTLE WORDS (1950)
This film was a "biography" of songwriters Bert Kalmar and Harry Ruby. Fred Astaire played Kalmar and Red Skelton played Ruby. Vera-Ellen's role was not great, but he played Fred Astaire's wife in this fictional biography. The best number was 'Where Did You Get That Girl" which was danced by Astaire and Vera-Ellen. It was the highlight of the film and most of the other numbers went to Fred Astaire and Red Skelton. Another number not to miss was "Come On Papa". It was another high-kicking song and dance routine, this time for Vera-Ellen though! 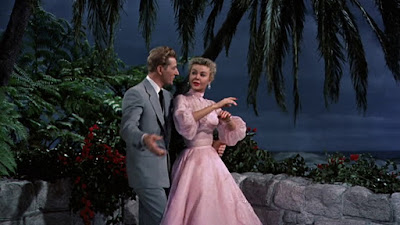 3. WHITE CHRISTMAS (1954)
This film is the movie that Vera is most remembered for. It also was her last big movie musical appearance, which is a pity. Vera got the chance to perform some great Irving Berlin numbers, and she never looked lovelier dancing to Berlin songs like: "Abraham" and "Mandy". The film belonged to Bing Crosby, but Vera-Ellen was great as Rosemary Clooney's sister and Danny Kaye's love interest. Vera and Danny Kaye had a beautiful musical dancing to a newer Irving Berlin song "The Best Things Happen While You're Dancing". The movie was a great end to a short movie musical career.

2.WORDS AND MUSIC (1948)
This film was another musical biography that MGM was famous for. This time it was the life story of composers Richard Rodgers and Lorenz Hart. It is sad that Vera-Ellen is only in the movie for one number, but it was one of the greatest dances ever captured on film. Vera dances with Gene Kelly to the classic number "Slaughter On Tenth Avenue". The movie is basically fiction but the appearance that Vera makes in the film is definitely the best part of the film. 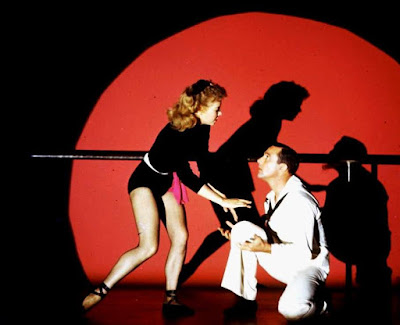 1. ON THE TOWN (1949)
Set in New York City, this classic movie musical probably featured Vera-Ellen the most. The whole film is spent with three soldiers (Gene Kelly, Frank Sinatra, and Jules Munshin) trying to find Miss Turnstiles (Vera). I am not a big ballet fan, but I love the "Miss Turnstiles Ballet" (an instrumental number from Leonard Bernstein's score). Vera's dance numbers in the movie tended to be more of a ballet orgin, but the dances were flawless. Although Vera appeared with Fred Astaire and Danny Kaye in a lot of movies, I think the screen chemistry of Vera and Gene Kelly were the best. Vera possessed that athletic and enthusiastic dancing ability that Gene Kelly possessed.
Posted by David Lobosco at 9:32 AM