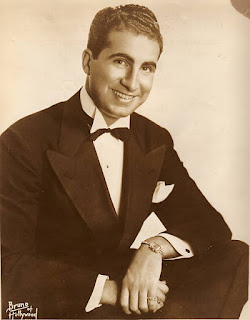 This article was written by my good friend BG on his Geezer Music club blog. He gave me permission to republish the excellent story here. Here is a link to his page and the original story: Geezer Music Club!

One of the things I enjoy about reading biographies of entertainment legends is learning about the less famous people whose lives revolved around the stars, like the guy I ran across in a book about Dean Martin. An accomplished saxophonist who’d gotten his start in the early big band era, Dick Stabile was the musical director for Martin and Lewis at the height of their fame as a comedy team, and for many years also backed up Dino on some of his best records. Along the way he found time to have a pretty good career as a bandleader.

Growing up in Newark meant that Stabile was just a stone’s throw from New York, and he wasted no time moving there in the 1920s to make a living as a professional musician. Still just a teenager, he bounced around a while and ended up in the well-regarded Ben Bernie’s orchestra, where he would spend the next decade learning the music business inside and out.

By the late 1930s Stabile had formed his own band and he found a lot of work in New York nightspots, including hotels and ballrooms, a fertile field for bands at that time. He also married singer Gracie Barrie, which proved to be a good move. Not only was she popular with fans of the band, she was also the one who kept the outfit going when Stabile later left for service in World War II. 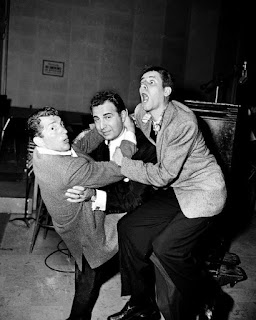 In the post-war years the big band era was in decline and Stabile began to change with the times, working more in radio and eventually relocating in Los Angeles, where he later began to work with Martin and Lewis. He would spend a number of years as the duo’s musical director, appearing on stage with them and eventually on TV too. Even after the comedy team split, he continued to provide musical accompaniment for Martin on some of his best records. He also recorded with other stars — Della Reese for one — before eventually returning to the leadership of a band of his own. In his later years he relocated to New Orleans, where he was a popular part of the local music scene until his death in 1980, at age 71.... 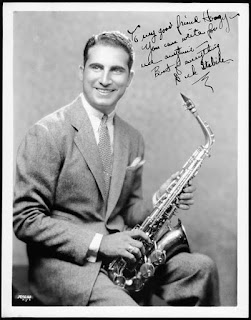 Posted by David Lobosco at 5:50 AM