BORN ON THIS DAY: CHARLES SCHULTZ 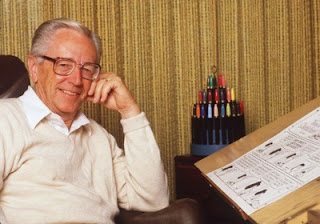 One of my favorite memories as a child was reading Peanuts cartoon strips and watching the annual Charlie Brown cartoons on television. It's creator, Charles Schultz, was born on this day on November 26, 1922. Born in Minneapolis, Minnesota, Schulz grew up in Saint Paul. He was the only child of Carl Schulz, who was born in Germany, and Dena Halverson, who had Norwegian heritage. His uncle called him "Sparky" after the horse Spark Plug in Billy DeBeck's comic strip, Barney Google.

Schulz loved drawing and sometimes drew his family dog, Spike, who ate unusual things, such as pins and tacks. In 1937, Schulz drew a picture of Spike and sent it to Ripley's Believe It or Not!; his drawing appeared in Robert Ripley's syndicated panel, captioned, "A hunting dog that eats pins, tacks, and razor blades is owned by C. F. Schulz, St. Paul, Minn." and "Drawn by 'Sparky'" (C.F. was his father, Carl Fred Schulz).

Schulz attended Richards Gordon Elementary School in Saint Paul, where he skipped two half-grades. He became a shy, timid teenager, perhaps as a result of being the youngest in his class at Central High School. One well-known episode in his high school life was the rejection of his drawings by his high school yearbook, which he referred to in Peanuts years later, when he had Lucy ask Charlie Brown to sign a picture he drew of a horse, only to then say it was a prank. A five-foot-tall statue of Snoopy was placed in the school's main office 60 years later. 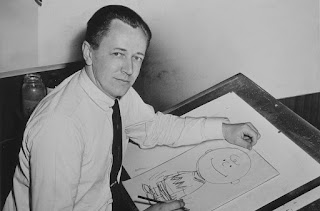 Schulz's first group of regular cartoons, a weekly series of one-panel jokes entitled Li'l Folks, was published from June 1947 to January 1950 in the St. Paul Pioneer Press, with Schulz usually doing four one-panel drawings per issue. It was in Li'l Folks that Schulz first used the name Charlie Brown for a character, although he applied the name in four gags to three different boys as well as one buried in sand. The series also had a dog that looked much like Snoopy. In May 1948, Schulz sold his first one-panel drawing to The Saturday Evening Post; within the next two years, a total of 17 untitled drawings by Schulz were published in the Post, simultaneously with his work for St. Paul Pioneer Press. Around the same time, he tried to have Li'l Folks syndicated through the Newspaper Enterprise Association; Schulz would have been an independent contractor for the syndicate, unheard of in the 1940s, but the deal fell through. Li'l Folks was dropped from the Pioneer Press in January 1950.

Later that year, Schulz approached the United Feature Syndicate with the one-panel series Li'l Folks, and the syndicate became interested. However, by that time Schulz had also developed a comic strip, using normally four panels rather than one, and reportedly to Schulz's delight, the syndicate preferred this version. Peanuts made its first appearance on October 2, 1950, in seven newspapers. The weekly Sunday-page debuted on January 6, 1952. After a somewhat slow beginning, Peanuts eventually became one of the most popular comic strips of all time, as well as one of the most influential. Schulz also had a short-lived sports-oriented comic strip called It's Only a Game (1957–1959), but he abandoned it due to the demands of the successful Peanuts. The rest is history... 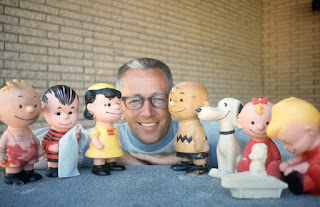 Posted by David Lobosco at 8:02 AM