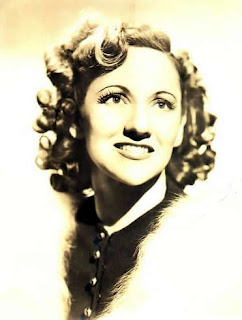 Connee Boswell, I feel is one of the most important voices in the history of female vocalists. Along with her sisters, Connee had a slew of hits in the 1930s before the sister group broke up in 1936. Connee stayed with Decca Records for the next twenty years, inspiring a generation of female voices. Much is written about her time as a Boswell Sisters and early solo efforts, but I thought Connee's later work from the mid 1950s and on deserved to be spotlighted.

In 1954, Connee recorded her last charted hit, “If I Give My Heart to You.” The song was a smash hit for Kitty Kallen but Boswell’s version rose to the #10 spot in September, 1954, and spent 11 weeks on the charts. After almost 25 years of chart topping hits - it was a great end to a momumental recording career. However, I wish more of her later work would have charted, because it saw her in great form.

On March 20, 1955 Connee and her husband Harry Leedy boarded a non-stop flight from Los Angeles to New York for a recording session. The American Airlines DC-7 made a crash landing in Chicago due to an engine failure. During the emergency landing, Connee puts on an in-flight performance from her wheelchair to help calm everyone on board. She sang "Comin' In on a Wing and a Prayer". All 66 people on board escape any serious injury after the plane lost it's nose gear and landed virtually tail up. Connee was praised for heroism by the media.

In August of 1955, the Boswell Sisters performed for the last time publicly. Vet and Martha go to see Connee perform at Jimmy Fazios Supper Club in Milwaukee. Connee persuaded her sisters to join her onstage. After a couple of false starts they performed the song they would also start a show with for good luck: “Heebie Jeebies.”

In April of 1956 Connee was back in Decca’s recording studios in NYC with Sy Oliver and His Orchestra. The subsequent recordings were issued as her second album, simply named “Connee.” This is her last recording session with Decca records, ending a twenty-five year collaboration that had yielded many hit recordings. If you have an opportunity to listen to one album - listen to this one. It is one of my favorite records of all-time. Connee sings some great numbers like "Stardust" and my personal favorite "I'd Climb The Highest Mountain". 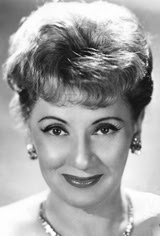 On July 2, 1958 Connee's sister Martha Boswell Lloyd died in Peekskill, NY after a lengthy illness. At the same time Connee appeared in her last film. I is a low-budget picture called “Senior Prom,” which briefly features her singing “When The Saints Go Marchin’ In.”  Also in 1958 Connee unfortunately made her last album "Connee Boswell Sings The Rodgers & Hart Songbook" on the Design Record label. It is unfortunate that Verve never signed Connee as they did Ella Fitzgerald. Connee still had an amazing voice in the 1950s.

Connee moved on to more causes that are dear to her heart by the 1960s. Connee was on the board of an organization called, “Comeback, Inc,” whose focus is rehabilitation of the chronically ill, aged and handicapped. By 1962 she decided to limit her performances to some occasional television work and club dates and stays much closer to home to care for Harry.

In radio interviews (and perhaps on television interviews as well), there was some talk about making a comeback, recording an album of Broadway tunes, and even that she had been working on her autobiography. There was also rumor of her talking with Hollywood studios about making a bio-pic of her life story, but these plans never materialized. She continued in her humanitarian work and volunteer appearances at children’s hospitals, and in her hobby of training dogs. 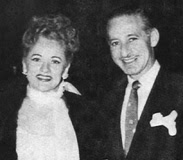 On January 1, 1975 After nearly forty years of marriage, Harry Leedy died in New York City. Connee later said that he came to bed, kissed her goodnight and the next morning when she woke up, he was gone. Connee beggan to make more frequent appearances in clubs and even appears with Benny Goodman in an anniversary concert. However, before long, it is clear to all that Connee was also ill. She has always had a very healthy appetite, saying herself that she could “eat like a horse.” She experienced severe stomach pain so she sought medical attention. On February 11, 1976 Connee underwent surgery at Mount Sinai Hospital in NYC to remove a tumor from her stomach. Doctors were optimistic that they could remove the tumor successfully.

Sometime afterward though, they discovered that the cancer had returned and began chemotherapy. By the early fall, she was confined to her hospital room at Mt Sinai and finally asked doctors to stop all treatments. On October 12, 1976 Constance Foore Boswell Leedy died at Mount Sinai Hospital in New York City. She was 68 years old. She was buried in Ferncliff Cemetery, Hartsdale, New York, next to her husband Harry.

She wrote the following poem just five days before her death:

“My days are numbered and it’s just as well.
Just how soon no one can tell.
I hope that it’s soon for the pain is vile,
A face filled with frowns instead of a smile.
When the end comes I’ll be at rest,
And just remember, it’s all for the best,
And when I’m gone remember me when
The sun shone brightly.
And now, Amen.” 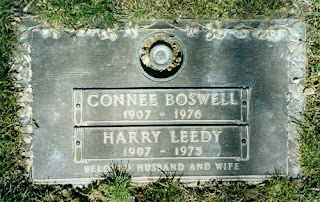