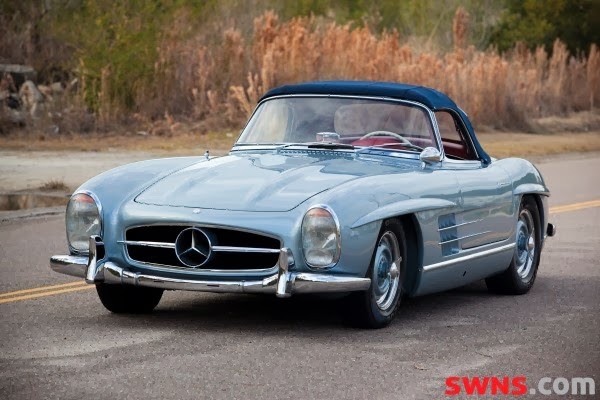 A stunning Mercedes originally owned by tragic Hollywood beauty Natalie Wood is expected to sell for £1 million at auction.

Wood was just 19 when she bought the brand-new Mercedes 300 SL Roadster in January 1958. Her 300 SL Roadster was one of the most sought after and exclusive cars of the day thanks to its looks and stunning performance.

And the young starlet made it one of the most unmistakable motors in Hollywood after she had it repainted PINK.

The Roadster, which is a convertible version of the iconic 300 SL ‘Gullwing’, is powered by a 3-litre engine developing 220bhp.This gives the Mercedes a top speed of more than 150mph – making it one of the fastest cars of its day.

Wood’s car, which has a red interior, also had the benefit of having the desirable Rudge wheels, with just 25 fitted by the factory. The car was later resprayed back to its original silver blue and has undergone an award-winning restoration.

It is going to be sold by its current owner at RM Auctions’ Amelia Island sale in Florida on March 8. Experts at RM expect the car to sell for around £1 million ($1.75m) when it crosses the auction block.

Posted by David Lobosco at 6:29 AM