The month of August marks the 100 anniversary of Gene Kelly's birth. It seems like only yesterday he was dancing with Judy Garland or performing an intricate number on roller skates or a cartoon mouse. Luckily Gene Kelly left his mark in countless great musicals that we can watch over and over again. Here are my five personal favorite Gene Kelly musicals... 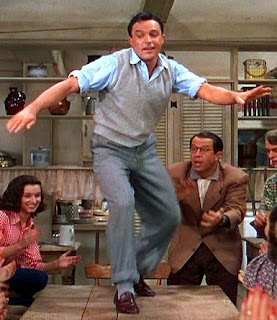 5. SUMMER STOCK (1950)
This is often an overlooked Gene Kelly musical. The movie is best remembered as the last movie that Judy Garland did at MGM. Her weight throughout the movie radically changed, but Kelly has some appealing dance numbers. I think one of his most energetic dances of all time was the dance to "Dig Brother Dig". This movie also marked the third and final time Kelly and Judy would appear together on film. It is an amazing example of his talent.

4. SINGIN IN THE RAIN (1952)
At first I wasn't even going to put Singin In The Rain on my list. Sure, I love the movie, but is it my favorite musical - no. I think the number that puts this beloved Kelly musical over the top for me was the "Broadway Dance Ballet" Kelly did with Cyd Charisse. I like the title number Kelly did in the rain, but I have seen it so much. I think the "Moses" number with his co star Donald O' Connor is truly great. Still though, the image of Kelly dancing in the rain with his umbrella is one of the most memorable cinema moments. 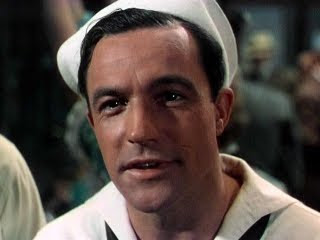 3. ON THE TOWN (1949)
This was one of the first Gene Kelly movies I saw back when I was starting to watch classic movies when VHS or even Beta first came out. Gene was of course great in the movie, but On The Town's appeal to me is the cast as a whole - Kelly, Frank Sinatra, Jules Munshin, Ann Miller, Vera-Ellen, and Betty Garrett was like a dream team of musical greats. My favorite number is Ann Miller's "Prehistoric Man", but Kelly took his talents to new heights in this movie with some pretty tricky choreography.

2. FOR ME AND MY GAL (1942)
Watching Gene Kelly in this movie, it is amazing it is his first film. He really had a commanding presence on the screen. This was the first movie he was paired with Judy Garland in, and they made a great team. From the title number to their terrific performance of "Ballin The Jack" they really looked like they were having fun together. For Kelly's first movie he did not really play a nice guy but in the end his character grew. It really was an amazing performance for Kelly just starting out. All of the songs were old even by 1942's standards, but Kelly and Judy brought new life to all of them. 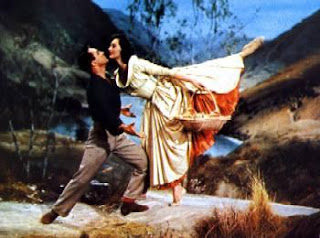 1. BRIGADOON (1954)
My stepfather, who is a 6ft 4in hunter, introduced me to Brigadoon when I was younger. The movie did not do well when it first came out, but I think since then the film has gotten more recognition. Kelly himself was disappointed with the movie because he wanted to film the musical on location in Scotland. MGM refused and shot the entire film on the backlot. One of my favorite numbers was "Almost Like Being In Love", and Kelly's version of the song is another memorable musical moment. Cyd Charisse and Van Johnson also are perfect in their roles as his love interest and his best friend respectively. The movie was one of the last of the great MGM musicals made, but Brigadoon is another example of why 100 years after his birth, Gene Kelly is still remembered...
Posted by David Lobosco at 4:27 AM

Labels: Brigadoon, Cyd Charisse, favorites, For Me And My Gal, Gene Kelly, musicals, On The Town, Singin In The Rain, Summer Stock