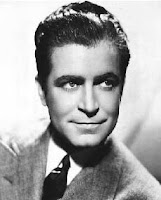 Orrin Tucker was one of the last living big band leaders. I also exchanged music with him back in the late 1990s. He had a long and wonderful life, even though he was an underrated big band leader...

Orrin Tucker, who led a “sweet” big band for nearly a half-century and was best remembered for a coyly suggestive 1939 recording of “Oh Johnny, Oh Johnny, Oh!” that featured the baby-voiced singer “Wee” Bonnie Baker, died April 9 near Los Angeles. He was 100, and the cause of death was not reported.

The handsome and personable Tucker enjoyed a remarkably long musical career that began when he formed his orchestra in 1933 and continued through the 1980s as owner of a Hollywood ballroom.

The late jazz critic and historian George T. Simon described Mr. Tucker, a onetime pre-med student who sang and played saxophone, as a “friendly and intelligent” musician who “maintained his equilibrium” after “Oh Johnny” catapulted him to prominence.

“Orrin knew his music, his public and his own limitations,” Simon wrote, “and so, a generation after most of the big bands had faded away, he was still around, still playing his pleasant music in some of the country’s smarter spots.”

Playing the light, undemanding jazz style called sweet, which played down improvisation, Mr. Tucker’s band crested along for decades, recording such tunes as “Billy,” “Would Ja Mind?” and his theme, “Drifting and Dreaming.”

He helped establish Columbia Records as a powerhouse when he dusted off “Oh Johnny,” a song of World War I vintage, and his “girl singer” Bonnie Baker spruced it up with sex appeal. 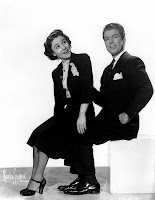 Emitting mischievous sighs between lyrics, Baker sang of a boy of dubious looks (“You’re not handsome, it’s true”) who more than made up for it in other ways.

After Navy service in World War II, Mr. Tucker formed a new band and tried to change his sound to a brassier style of swing — only to hear from “hotel managers [who] threatened to cancel any return bookings if we didn’t go back to the old sound, which I did,” he said. 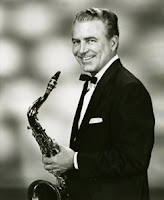 He broadened his repertoire to include songs such as “Bad, Bad Leroy Brown,” but he knew his days as a performer were nearing an end. He shut down the ballroom in 1982 and worked in the real estate business in Palm Springs, Calif.

“Orrin Tucker’s death is probably more notable for the longevity that preceded it, as well as for ‘Wee’ Bonnie Baker’s contribution to the band’s success,” said Rob Bamberger, the host of WAMU-FM’s “Hot Jazz Saturday Night” program.

“The wispy sound of the ‘sweet’ bands has not stood up well with time,” Bamberger added, “but Tucker’s band was certainly among the best of its sort.”

Robert Orrin Tucker was born Feb. 17, 1911, in St. Louis, and grew up in Wheaton, Ill. He had an early ambition toward medicine but also was drawn to music as a child when he saw a picture of a shiny saxophone in a Sears Roebuck mail-order catalog.

He moonlighted as a musician while attending North Central College in Naperville, Ill., and found himself in such demand that he formed his own band. He hired singer Evelyn Nelson on trumpeter Louis Armstrong’s recommendation.

“He told me that she sings with a cute voice and that if I wrote cute songs for her, I could make her a star,” Mr. Tucker told the publication Jazz Connection.

He changed her name to Bonnie Baker, which he considered a “name with confidence.” She barely reached 5 feet, prompting Mr. Tucker to introduce her as “Wee” Bonnie Baker.

Mr. Tucker’s first marriage, to fashion model Jill Powell, ended in divorce. In 1975, he married the former Aline Cameron. Besides his wife, survivors include a daughter and a grandson.

“There were so many musicians that said, regardless what the public wants, I’ll play the way I want to play,” Mr. Tucker once reflected. “I’ve always tried to play the music people are fond of and play it the way they want to hear and the way it is easy to dance to. I made it a point to know what the public liked and did my best to please them.”