BORN ON THIS DAY: LIONEL BARRYMORE

During World War I Lionel staved off the deadly Spanish Influenza by taking cold alcohol baths as an antiseptic.He was married twice, to actresses Doris Rankin and Irene Fenwick, a one-time lover of his brother John. Doris's sister Gladys was married to Lionel's uncle Sidney Drew, which made Gladys both his aunt and sister-in-law.

Doris Rankin bore Lionel two daughters, Ethel Barrymore II (b. 1908) and Mary Barrymore. Unfortunately, neither baby girl survived infancy, though Mary lived a few months. Lionel never truly recovered from the deaths of his girls, and their loss undoubtedly strained his marriage to Doris Rankin, which ended in 1923. Years later, Barrymore developed a fatherly affection for Jean Harlow, who was born about the same time as his two daughters and would have been about their age. When Jean died in 1937, Lionel and Clark Gable mourned her as though she had been family.

In 1924, he left Broadway for Hollywood. He starred as Frederick Harmon in director Henri Diamant-Berger's drama Fifty-Fifty (1925) opposite Hope Hampton and Louise Glaum, and made several other freelance motion pictures, including The Bells (Tiffany Pictures 1926) with a then-unknown Boris Karloff. After 1926, however, he worked almost exclusively for MGM, appearing opposite such luminaries as John Gilbert, Lon Chaney, Sr., Jean Harlow, Wallace Beery, Marie Dressler, Greta Garbo, and his brother John.

On the occasional loan-out, Barrymore had a big success with Gloria Swanson in 1928's Sadie Thompson and the aforementioned Griffith film, Drums of Love. Talkies were now a reality and Barrymore's stage-trained voice recorded well in sound tests. In 1929, he returned to directing films. During this early and imperfect sound film period, he made the controversial His Glorious Night with John Gilbert, Madame X starring Ruth Chatterton, and Rogue Song, Laurel & Hardy's first color film. Barrymore returned to acting in front of the camera in 1931.

In that year, he won an Academy Award for his role as an alcoholic lawyer in A Free Soul (1931), after being nominated in 1930 for Best Director for Madame X. He could play many characters, like the evil Rasputin in the 1932 Rasputin and the Empress (in which he co-starred with siblings John and Ethel) and the ailing Oliver Jordan in Dinner at Eight (1933 - also with John Barrymore, although they had no scenes together). 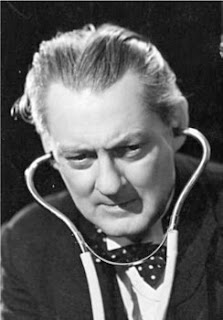 In a series of Doctor Kildare movies in the 1930s and 1940s, he played the irascible Doctor Gillespie, repeating the role he'd created in the radio series throughout the 1940s. He also played the title role in another 1940s radio series, Mayor of the Town. Barrymore had broken his hip in an accident, hence he played Gillespie in a wheelchair; later, his worsening arthritis kept him in the chair. The injury also precluded his playing Ebenezer Scrooge in the 1938 MGM film version of A Christmas Carol, a role Barrymore played every year but one on the radio from 1934 through 1953.

Perhaps his best known role, thanks to perennial Christmastime replays on television, was Mr. Potter, the miserly and mean-spirited banker in It's a Wonderful Life (1946). His final film appearance was a cameo in Main Street to Broadway, an MGM musical comedy released in 1953. His sister Ethel also appeared in the film. 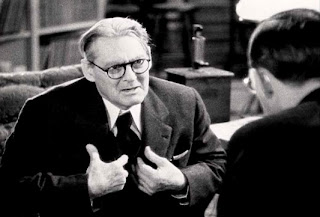 Lionel Barrymore died on November 15, 1954 from a heart attack in Van Nuys, California, and was entombed in the Calvary Cemetery in East Los Angeles, California...
Posted by David Lobosco at 6:19 AM