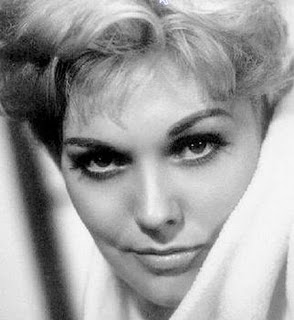 The beautiful and talented Kim Novak was born Marilyn Pauline Novak in Chicago, Illinois, to Joseph and Blanche Novak. Her father was a second-generation Czech immigrant while her mother had a Bohemian background. Her father worked as a dispatcher on the Chicago, Milwaukee and St. Paul Railroad and both her parents had been teachers.

While attending David Glasgow Farragut High School, she won a scholarship to the Art Institute of Chicago. After leaving school, she began a career modeling teen fashions for a local department store. She later received a scholarship at a modeling academy and continued to model part-time. She worked as an elevator operator, a sales clerk and a dental assistant.

After a job touring the country as a spokesman for a refrigerator manufacturer, "Miss Deepfreeze", Novak moved to Los Angeles, where she continued to find work as a model.

The 20-year-old actress began with an uncredited role in The French Line (1954). Eventually, she was seen by a Columbia Pictures talent agent and filmed a screen test. Novak was signed to a six-month contract, and the studio changed her first name to Kim. Novak debuted as Lona McLane that same year in Pushover opposite Fred MacMurray and Philip Carey, and played the femme fatale role of Janis in Phffft! opposite Judy Holliday, Jack Lemmon, and Jack Carson. Novak's reviews were good . People were eager to see the new star, and she received an enormous amount of fan mail.

After playing Madge Owens in Picnic (1955) opposite William Holden, Novak won a Golden Globe Award for Most Promising Newcomer and for World Film Favorite. She was also nominated for the British BAFTA Film Award for Best Foreign Actress. That same year she played Molly in The Man with the Golden Arm with Frank Sinatra. In 1957 she worked with Sinatra again for Pal Joey, which also starred Rita Hayworth, and starred in Jeanne Eagels with Jeff Chandler. She was on the cover of the July 29, 1957, issue of Time Magazine. That same year, she went on strike, protesting her salary of $1,250 per week.

In 1958, Novak starred in the Alfred Hitchcock-directed classic thriller Vertigo, playing the roles of a brunette shopgirl, Judy Barton, and a blonde woman named Madeleine Elster.

Today, the film is considered a masterpiece of romantic suspense, though Novak's performance has received mixed reviews. Critic David Shipman thought it "little more than competent", while David Thomson sees it as "one of the major female performances in the cinema". Hitchcock, rarely one to praise actors, dismissed Novak in a later interview. "You think you're getting a lot," he said of her ability, "but you're not." In that same year, she again starred alongside Stewart in Bell, Book and Candle, a comedy tale of modern-day witchcraft that did moderately well at the box office. 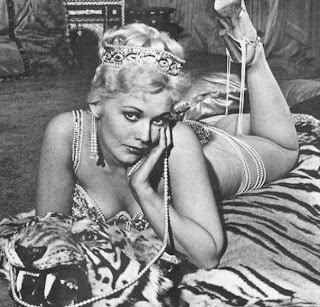 In 1960, she co-starred with Kirk Douglas in the critically acclaimed Strangers When We Meet also featuring Walter Matthau and Ernie Kovacs. In 1962, Novak produced her own movie, financing her own production company in association with Filmways Productions. Boys' Night Out, in which she starred with James Garner and Tony Randall. It was received mildly well by critics and the public. She was paired with Lemmon for a third and final time that year in a mystery-comedy, The Notorious Landlady.

In 1964 she played the vulgar waitress Mildred Rogers in a remake of W. Somerset Maugham's drama Of Human Bondage opposite Laurence Harvey, and starred as barmaid Polly, "The Pistol" in Billy Wilder's Kiss Me, Stupid with Ray Walston and Dean Martin. Both films were critically panned. After playing the title role in The Amorous Adventures of Moll Flanders (1965) with Richard Johnson, Novak took a break from Hollywood acting. She continued to act, although infrequently, taking fewer roles as she began to prefer personal activities over acting.

Her comeback came in a dual role as a young actress, Elsa Brinkmann, and an early-day movie goddess who was murdered, Lylah Clare, in producer-director Robert Aldrich's The Legend of Lylah Clare (1968) with Peter Finch and Ernest Borgnine for MGM. The movie did not do well . After playing a forger, Sister Lyda Kebanov, in The Great Bank Robbery (1969) opposite Zero Mostel, Clint Walker, and Claude Akins, she stayed away from the screen for another four years. She then played the role of Auriol Pageant in the horror anthology film Tales That Witness Madness (1973), which also starred Joan Collins. She starred as veteran showgirl Gloria Joyce in the made-for-TV movie The Third Girl From the Left (1973), and played Eva in Satan's Triangle (1975). She was featured in the 1977 western The White Buffalo with Charles Bronson, and in 1979 she played Helga in Just a Gigolo co-starring David Bowie.

In 1980, Novak played Lola Brewster in the mystery/thriller The Mirror Crack'd, based on the story by Agatha Christie and co-starring Angela Lansbury, Tony Curtis, Rock Hudson and Elizabeth Taylor. She and Taylor portrayed rival actresses. She made occasional television appearances over the years. She co-starred with James Coburn in the TV-movie Malibu (1983) and played Rosa in a revival of Alfred Hitchcock Presents (1985) opposite Melanie Griffith. From 1986 to 1987, the actress was a cast member of the television series Falcon Crest during its fourth season, playing the mysterious character Kit Marlowe (the stage name rejected at the start of her career). She co-starred with Ben Kingsley in the 1990 film The Children.

Her most recent appearance on the big screen to date came as a terminally ill writer with a mysterious past in the thriller Liebestraum (1991), opposite Kevin Anderson and Bill Pullman. However, owing to battles with the director over how to play the role, her scenes were cut . Novak later admitted in a 2004 interview that the film was a mistake.

Novak has not ruled out further acting. In an interview in 2007, she said that she would consider returning to the screen "if the right thing came along. I wish it would...
Posted by David Lobosco at 4:03 AM