THE LAST DAYS OF BOB HOPE 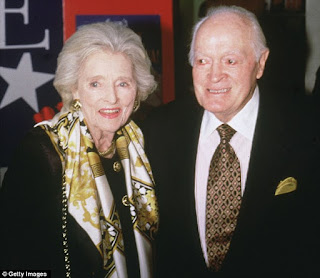 It is hard to believe but Bob Hope has been gone for 15 years now. Bob Hope was, without much argument, the most popular and beloved comedian of the 20th century. His career as a comedian is entirely unparalleled and unrivaled.

Hope was a hit in every possible entertainment medium. He was a star in Vaudeville, a hit on the Broadway stage, and had long-running #1 radio shows. Hope starred in almost 70 movies and shorts, including the classic and beloved seven "road pictures" he made with Bing Crosby over a 22-year span from 1940 to 1962.

His television specials began in 1950 and ran for over 40 years on NBC. In their heyday, these shows garnered some of the highest ratings in television history.

Hope hosted the Academy Awards a record 18 times and is still generally acknowledged as the best-ever Oscar host by all who remember his hilarious hosing chores.

But perhaps most important and significant was Hope's ever-present willingness to entertain the American troops in four different wars. 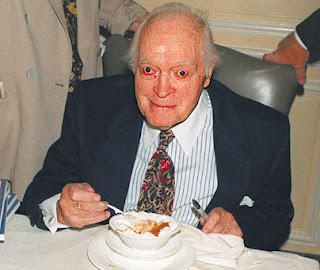 Hope was a self-confessed ham, always needing and craving the applause and the spotlight. But after an incredibly successful career, unlike other comedy notables, including Lucille Ball and Johnny Carson, Hope just didn't know when to "get off the stage.” His health had been deteriorating and by the early 1990's, his once hilarious, sharp monologues had become ordeals, lessened by Bob's slower reflexes and delivery, and his slightly slurred speech. Nonetheless, he kept booking gigs and making appearances.

By the time of his 90th birthday, on May 29, 1993, NBC was presented with a challenge. A big celebration was clearly called for, but Bob's eyesight and hearing were so bad he could no longer carry the show on his own. The network put on a lavish three-hour ceremony in which Hope was largely a bystander.

To help him follow what was going on, Hope was given a small microphone to wear in his ear, so that his daughter Linda, who was sitting in the control room, could brief him on who was there and what was happening.

The special came off well, and did well in the ratings- it would have been a perfect "farewell" event, but Hope refused to retire. He refused to leave NBC, who obviously couldn't "fire" a national institution. He continued to do his specials on the network. 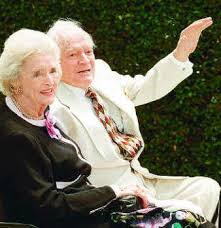 His specials -now mostly shunted to low-viewership on Saturday nights- were getting the worst ratings of his career. His family tried to coax Hope into retirement. In 1995, he planned a trip to Europe to celebrate and entertain in honor of the fiftieth anniversary of V-E day. His wife Dolores threw up her hands, “We're doing this one,” she stated firmly, "but this has got to be the last.”

Hope's last NBC special “Laughing with the Presidents,” aired on November 23, 1996. The special came off without embarrassment and Bob Hope began his "golden" years of very well-deserved (if not desired) retirement.

Besides his fading hearing and eyesight, signs of dementia were now showing. In his few public appearances, at various dinners and ceremonial events, Hope seemed disoriented and confused. His short term memory was spotty and he had trouble recognizing people.

At home, Bob settled into a comfortable routine. He still slept late, as always, waking up between 10 and 11 AM. His caretaker, J. Dennis Paulin, would read to him from the morning L.A. Times. Large-print editions were made of business documents that he needed to see.

Hope loved to watch Jeopardy! on TV (with headphones, so he could hear).

He had always loved taking late night walks, and still did, but now they were indoors, up and down the aisles of the local Von's supermarket in Toluca Lake. Paulin would let him take the wheel of his golf cart and play and drive the five blocks to lakeside to play a few holes of his beloved golf. Afterwards, he would go to the clubhouse for a fake brandy alexander.

In 1996, after a lifetime of dilatory churchgoing, Hope acceded to his devout wife's wishes and was baptized into the Catholic Church. 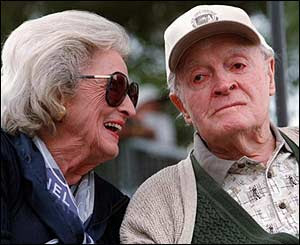 Reports of his failing health occasionally made the tabloids, along with unsympathetic photos of his stooped frame and red-rimmed eyes, accompanied by the usual headlines of Bob Hope's "tragic last days.”

He made a few trips to Washington for events honoring him- including a visit to the White House, where President Clinton signed a congressional resolution making Hope the first honorary veteran of the US Armed Forces. In 2000, he he was proudly present for the opening of the Bob Hope Gallery of Entertainment at the Library of Congress.

Bob lingered on for three more years- bedridden most of the time- but brought out by Dolores in a wheelchair for family get-togethers, He was, by now, almost completely blind.

On May 29, 2003, he celebrated his one hundredth birthday (he received over 2,000 birthday cards from everyone from President George W. Bush to Queen Elizabeth). Thirty-five states proclaimed his birthday "Bob Hope Day.”

His last words were, fittingly, quite humorous. Towards the end, when his wife Dolores asked him where he wanted to be buried, the amazing Bob Hope quipped, “Surprise me.” 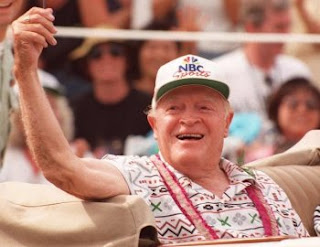 SOURCE
Posted by David Lobosco at 9:03 AM