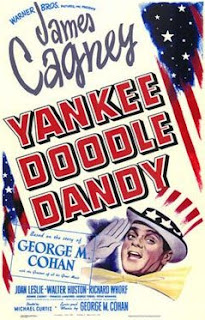 You know as of this writing I have never seen the film Yankee Doodle Dandy all the way through. I promise I will do that this year! With it being Independence Day, here is the original review of the film. This was written by Bosley Crowther and published in the NY Times on May 30, 1942...

"Yankee Doodle Dandy" rode into town last night on a whole lot more than a pony; it rode on the star-spangled crest of one of the fanciest build-ups that Broadway has ever known, not to mention the glowing reputation of one of "the Street's" most beloved sons. Folks who are looking for something propitious to decorate today would do well to try for a seat at the Hollywood Theatre. For there, at the scene of last night's "$5,000,000 première," you will find as warm and delightful a musical picture as has hit the screen in years, a corking good entertainment and as affectionate, if not as accurate, a film biography as has ever—yes, ever—been made.

No need to tell anybody who the subject of this sparkling picture is. The public has been well advised for months that Warner Brothers were filming the life of George M. Cohan, with all the old Cohan songs and bits from his memorable shows. And the fact that cocky James Cagney would play the leading role has been a matter of common knowledge and of joyous anticipation all around. So the only news this morning is that all has come out fine. The picture magnificently matches the theatrical brilliance of Mr. Cohan's career, packed as it is with vigorous humor and honest sentiment. And the performance of Mr. Cagney as the one and original Song-and-Dance Man is an unbelievably faithful characterization and a piece of playing that glows with energy.

True, Robert Buckner and Edmund Joseph, the script-writers, have taken some liberties with Mr. Cohan's life. They have juggled facts rather freely to construct a neat, dramatic story line, and they have let slip a few anachronisms which the wise ones will gleefully spot. But, as the late Sigmund Lubin once put it, they're yours at no extra cost. And, of course, Mr. Cohan had the last word. He said okay, let them go. 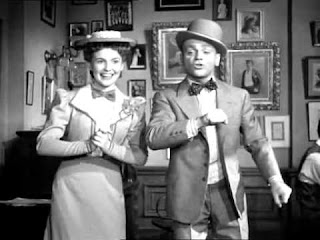 And the story as now presented is that of a lusty trouper, a showman who earned in the theatre a lasting place in our nation's Hall of Fame. Indeed, the picture begins with Cohan being called to Washington while playing the role of President Roosevelt in the musical show "I'd Rather Be Right." At the White House he meets the President (an unprecedented trick for the screen) and to him is told, in flashback, the wonderful story of this Yankee dandy's life.

And it is a hummer of a life! It starts on July 4, 1878, in Providence, R. I., when the red and squawling Georgie first hitched his wagon to the stars and stripes. And it follows the fortunes of the Cohan family—the famous Four Cohans, vaudeville specialists—through their picturesque trouping around the country, the first break of saucy George as "Peck's Bad Boy," his teaming with Sam H. Harris and the production of "Little Johnny Jones," and it traces his rising fortune to the World War and the writing of "Over There." Then it digresses pleasantly into the fictitious afternoon of the family's life, and takes up for a climax with Cohan receiving the Congressional Medal of Honor from President Roosevelt. 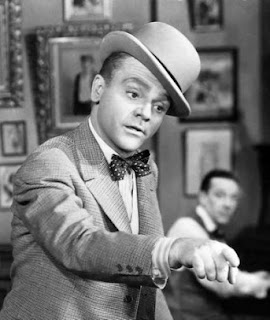 Without question, the most solidly entertaining portion of the film is that which has to do with Cohan's early bouts with the stage and the sumptuous reproductions of bits from his early shows. Here Mr. Cagney excels, both in characterization and jubilant song and dance. His handling of "Yankee Doodle Boy" and "Give My Regards to Broadway," from "Little Johnny Jones," must be—with all due respect—quite as buoyant as Mr. Cohan's own. And one priceless dialogue he plays with Eddie Foy Jr., representing the elder Foy, couldn't have been better if Mr. Cohan had played it—and written it—himself.

The abundance of further pleasures is endless. There is Irene Manning playing Fay Templeton and singing "Mary Is a Grand Old Name" and "So Long, Mary," fit to make any oldster cry. There are the excellent performances of Joan Leslie as Cohan's romantic prompter, Rosemary DeCamp as his mother, Richard Whorf as Sam H. Harris, and countless others, not to forget Captain Jack Young's tastefully restrained and surprisingly realistic impersonation of the President. Indeed, there is so much in this picture and so many persons that deserve their meed of praise that every one connected with it can stick a feather in his hat and take our word—it's dandy! 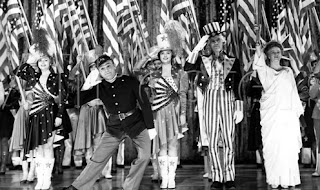 SOURCE
Posted by David Lobosco at 8:40 AM