Here is a new feature to my blog, where we feature the movies reviews of my friend and movie guru Bruce Kogan. His knowledge and love of movies are amazing... 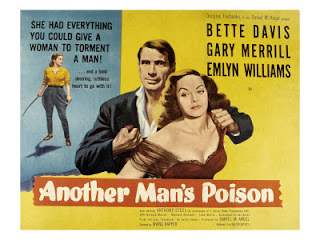 Real life married couple Bette Davis and Gary Merrill went to the United Kingdom to do this feature film based on a play by Leslie Sands. Another Man's Poison had no run on Broadway so I had no cast in which to compare the movie cast with. I would dearly have loved to know who the original British cast was, that would prove interesting.

With her clipped New England speech, Bette Davis like Katharine Hepburn had no trouble doing occasional English roles, Davis in fact did the best of them all, their good Queen Elizabeth on two occasions. Here she's something less than a Queen, she's a willful manipulator of people and events something I'm guessing she picked up in her profession as an Agatha Christie type mystery writer.

Before the events of the film start we learn that Bette is estranged from her husband whom none of the villagers in the small hamlet in the United Kingdom have met. She says he's in Malaya growing rubber on a plantation, but in fact he's a bank robber and he came there looking for her to give him shelter and a hideout. Instead because she's got big eyes for Anthony Steel, the fiancé of her secretary Barbara Murray she kills her husband and hides the body. 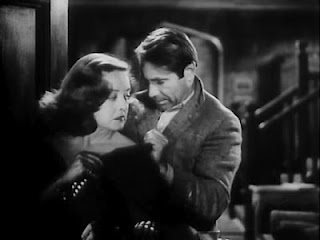 When to start the action in walks Gary Merrill her husband's accomplice in the robbery and also a wanted man. When the local veterinarian Emlyn Williams comes to call Merrill pretends he's long lost husband and Davis backs him up.

Which starts a relationship of convenience for both Davis and Merrill both stuck with each other, but both needing each other to some degree. But with Bette manipulating to trap Steel at the same time the whole situation just simmers to a boil in the end.

Best in the cast is Emlyn Williams. His veterinarian comes over like a country bumpkin, but he's really quite astute, almost like a rural English Columbo. Over here they would have the veterinarian the lead in a television series.

Not top drawer Bette Davis, but in fact her bravura acting style carries this film over some rough patches. Another, a lesser actress might have not done as much with the material, but Bette Davis certainly could and did... 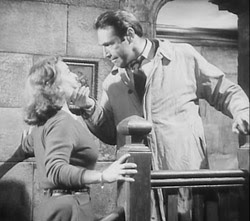