BUD ABBOTT: A YEAR AFTER LOU

Here is an interesting article I found on what was happening to Bud Abbott after Lou Costello died. I want to remind you that Bud and Lou broke up the team in 1957, and Lou Costello died on March 3, 1959. This article originally appeared in an issue of Screen Stories from 1960. Abbott was pretty bitter and sad, and he definitely missed the fame he had had with his partner Lou Costello...

Gray-haired Bud Abbott stared bleakly out of his breakfast-room window, at the brown, untended lawn and grounds of his Encino, California home. Although it was past noon, he still wore his bedroom slippers, pajamas and white flannel robe. Why get dressed? He had no place to go, no job to do. In another part of the house, Mrs. Abbott lay in bed with the flu. And out by the garage in back, his son, Bud Jr., and several of his friends, tinkered with the engine of a hot rod.

Abbott turned to look at me, and said bitterly, “Once they get their hooks into you, you’re a dead pigeon.” He was speaking of Uncle Sam’s well-known Internal Revenue men.

The straight-man member of the famous Abbott and Costello team, who once earned millions as one of show businesses’ most popular comedy teams, has fallen upon lean, unhappy days. He’s broke and virtually friendless. Gone is the fortune and his assets, since he’s had to fork over a half-million dollars to the Federal Government in the last few years, for disallowed expenses on his personal income taxes. The era of rich living, custom-made suits and thirty dollar shirts is gone.

Former happy-go-lucky partner, chubby Lou, who was ten years his junior, died of a heart attack last year. Bud has sold everything he owned, including a $125,000 ranch at Ojai, California, to make up the back-tax bite. He still owes between $70,000 and $80,000, and has no idea where he will get it. Abbott who made his last picture with his partner Lou about six years ago, said Costello has similar tax difficulties before he died; but he was able to pay off his obligations and still have something left, because he owned their filmed TV series.

Bud, his wife and children still live in their large, five bedroom, ranch-style home, but it has been up for sale for two years. His asking price was recently lowered to $65,000. When it’s sold, all the money will go to the government. Once a four-and-one-half-acre estate, it has now been cut to one acre, with houses going up on the other acreage to help pay Bud’s debt.

Abbott’s story is one of the unhappiest of onetime famous stars who hit it big and lost it all. He climbed with partner Costello from New York’s bawdy Minsky burlesque to the big time. The pair – a straight man and a baggy-pants comic – joined forces in 1937 and were a hit. In 1940, they headed for Hollywood where they signed their first Universal Pictures movie contract. They were a rapid and fabulous success. Their famous routine, “Who’s on first?” became internationally known; millions around the world laughed at their zany antics. In nine of the following twelve years, they finished among the top ten money-making stars at the nation’s box offices. Each was making a half-million dollars a year from films, vaudeville and personal appearances, TV and radio. By 1953, their peak, they were earning a fantastic $1,750,000 a year between them.

“Yeah.” Bud retorted, “but the Government was taking most of it away too, because we were in the ninety to ninety-five per cent tax bracket. But we had to live up to our status in life.” 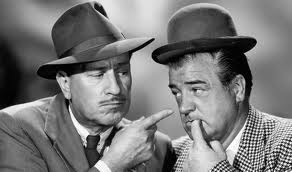 Even at that early date, their manager Eddie Sherman warned them that they would never get out of the hole until they sold their houses and lived more modestly. Sixty-four years old, Bud’s tax troubles began when the government undertook a seven-year tax audit of his books a couple years back.

I asked him for an example.

“Well, I always had a chauffer, because I have never driven a car in my life. I still can’t drive. I paid him one hundred dollars a week. They disallowed his salary on expenses for the whole seven-year period. They paid no attention when I tried to explain that I can’t drive and my wife can’t drive and the only way we can get out of this place is if a friend comes by and takes us. And there don’t seem to be many of them any more.”

Abbott made his last professional appearance with Lou Costello in 1957, in an engagement at the Sahara Hotel in Las Vegas. Shortly afterwards, they broke up their long-time partner-ship at Lou’s request. They has been having arguments over money matters.

“You never heard of a comedy team that didn’t fight, did you?” Abbott asked. “But for twenty years as a professional team, Lou and I were closer than man and wife.”

Last year, Hollywood was startled to read in a wire service story that Bud was asking each of his former fans for fifty cents to help him get off the tax hook.  Unhappily, Abbott said, “That story wasn’t true. It wasn’t presented right. The reporter who wrote it called and asked me a hypothetical question: ‘If all my fans gave me fifty cents each, wouldn’t I get out of debt?’ I said, “I guessed so.’ Then the story came out that I was asking for a half a buck from everyone.

“I don’t want to beg. I never asked. ‘Brother can you spare fifty cents?’ Even so, half dollars came in from all over the U.S. and Canada. Many of them came with nice letters.

“But the whole thing didn’t total up to more than a few hundred bucks.” 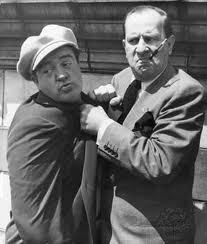 Abbott is soured on hopes for a show-business comeback ever since his experience last year following Lou’s death. It had been reported that he and old-timer Eddie Foy Jr., one of vaudeville’s Seven Little Foys, would team up for a comedy act.

“He sent for me, we shook hands on it – and I haven’t heard from him since. I don’t understand it. After all, l I didn’t send for him; it was the other way around. A hundred lesser-known guys have wanted to team up. But why should I, at my age?”

Abbott has found that in fickle forgetful Hollywood if you aren’t on top, many good-time friends desert you.

Bud said acidly, “They liked me so long as the liquor flowed at my house, but I haven’t seen any of them around lately.”

A staunch bulwark through his tribulations has been Bud’s pleasant wife Betty, to whom he has been married for almost forty-two years. They were married on September 17, 1918, after an acquaintance of only six hours. They met during a yacht trip on the Potomac, during which Abbott saved Betty’s girl friend from drowning. Shortly afterwards, they went to a marriage bureau to apply for a wedding license. Today, Bud worries about his wife’s having to care for their large home without any help. Before, there was a corps of servants to keep up the house and grounds. Now both of their adopted children are living with them. Last year, their eighteen-year-old daughter Rae Vickie married Don Wheeler, a Navy man from nearby Oxnard Naval Base. When he was discharged, they drove back to his parent’s home in Mineola, New York; but last winter, they returned to the Abbotts. Twenty-one-year-old Bud Jr. is attending Valley Junior College, in the San Fernando Valley.

Among the assets which Bud had to dispose of were the twenty feature films that Lou Costello and he made for Universal. They owned a piece of each of them – in some instances, twenty-five percent; in others, fifty percent. Bud sold his rights for $100,000. He stated, “I never saw the check.” Today he believes the rights would be worth $1,000,000.

Abbott was asked if he would voluntarily open his business books to newsman, to back up his charges of an unfair tax audit. His reply: “I don’t want to get in any deeper than I am with the tax people now.”

He was asked why he didn’t take his case to the courts if he felt he had been unfairly treated. “I can’t afford those high-salaried attorneys.” He told me.

How about a settlement? Bus answered: “The Government wouldn’t make a settlement. Why? Because I’m an American. Why should they make a deal with me when they have everything I own as securities?

“They settled with Charlie Chaplin – sure – because he was out of the country. He’s not even a citizen. But when they can get a hand on an American’s securities, they won’t even talk about settlement.

“That’s why so many stars are making pictures in Europe today. The tax guys are making thieves out of everybody.”

However bitter he may feel about his tax audit, Bud has only words of praise for Uncle Sam’s individual collectors, who he said, heave treated him with every courtesy and cooperation. “They could have moved me out of my own home, but they didn’t.”

But Bud has plans to get his head above water again. His long-time manager Eddie Sherman is shopping around Hollywood studios with the idea of making a movie based on the live of Abbott and Costello. And he’s considering putting together some of their comedy segments, from their numerous appearances on TV’s former Colgate Comedy Hour, for new TV shorts.

He also owns their routines from Kate Smith’s radio show, on which Costello and he appeared for three years; he may piece these together for new radio transcriptions. As he pointed out, the Abbott and Costello slapstick routines are just as good today. Bud peered out of his breakfast-room window again. A squirrel popped up on a low wall by the driveway. Bud grabbed a nut from a bowl on the table, hurried to the door and tossed it toward the squirrel.

Just then a bluejay came by. Bud mustered. “Now see, that bluejay is going to get it first.”

Sure enough, the bird reached the nut first, picked it up in its beak and flew off. Bud got another nut and flipped it to the squirrel. “We have eight of them living here.” He said, pleased. Today, it is a family of squirrels living in his yard which gives Bud Abbott his primary pleasure out of life. Gone are the crammed hours before studio movie cameras, the jaunts to faraway places like Australia for personal appearances, the five-a-day vaudeville at the Roxy in New York, the work before TV cameras and radio microphones.

Today, a lonely, bitter Bud Abbott looks back on his successful professional life and wonders: What was the point of it all... 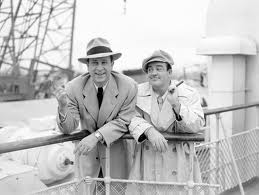