HISTORY OF A SONG: WHITE CHRISTMAS 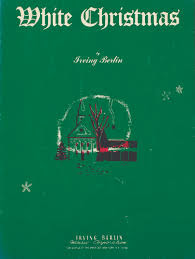 "White Christmas" is a 1942 Irving Berlin song reminiscing about an old-fashioned Christmas setting. The version sung by Bing Crosby is the world's best-selling single with estimated sales in excess of 100 million copies worldwide. Other versions of the song, along with Crosby's, have sold over 50 million copies.

Accounts vary as to when and where Berlin wrote the song. One story is that he wrote it in 1940, in warm La Quinta, California, while staying at the La Quinta Hotel, a frequent Hollywood retreat also favored by writer-director-producer Frank Capra, although the Arizona Biltmore also claims the song was written there. He often stayed up all night writing—he told his secretary, "Grab your pen and take down this song. I just wrote the best song I've ever written—heck, I just wrote the best song that anybody's ever written!"

The first public performance of the song was by Bing Crosby, on his NBC radio show The Kraft Music Hall on Christmas Day, 1941; a copy of the recording from the radio program is owned by Crosby's estate and was loaned to CBS News Sunday Morning for their December 25, 2011 program. He subsequently recorded the song with the John Scott Trotter Orchestra and the Ken Darby Singers and for Decca Records in just 18 minutes on May 29, 1942, and it was released on July 30 as part of an album of six 78-rpm discs from the musical film Holiday Inn. At first, Crosby did not see anything special about the song. He just said "I don't think we have any problems with that one, Irving." The song established that there could be commercially successful secular Christmas songs —in this case, written by a Jewish-American songwriter. 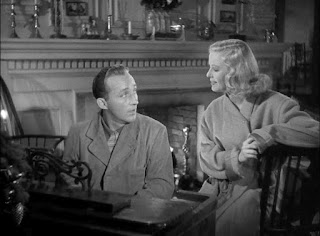 The song initially performed poorly and was overshadowed by Holiday Inn's first hit song: "Be Careful, It's My Heart". By the end of October 1942, "White Christmas" topped the Your Hit Parade chart. It remained in that position until well into the new year. It has often been noted that the mix of melancholy—"just like the ones I used to know"—with comforting images of home—"where the treetops glisten"—resonated especially strongly with listeners during World War II. A few weeks after the attacks on Pearl Harbor, Crosby introduced "White Christmas" on a Christmas Day broadcast. The Armed Forces Network was flooded with requests for the song. The recording is noted for Crosby's whistling during the second chorus.

In 1942 alone, Crosby's recording spent eleven weeks on top of the Billboard charts. The original version also hit number one on the Harlem Hit Parade for three weeks,  Crosby's first-ever appearance on the black-oriented chart. Re-released by Decca, the single returned to the No. 1 spot during the holiday seasons of 1945 and 1946 (on the chart dated January 4, 1947), thus becoming the only single with three separate runs at the top of the U.S. charts. The recording became a chart perennial, reappearing annually on the pop chart twenty separate times before Billboard magazine created a distinct Christmas chart for seasonal releases. 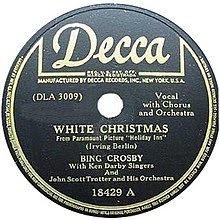 In Holiday Inn, the composition won the Academy Award for Best Original Song in 1942. In the film, Crosby sings "White Christmas" as a duet with actress Marjorie Reynolds, though her voice was dubbed by Martha Mears. This now-familiar scene was not the movie makers' initial plan. In the script as originally conceived, Reynolds, not Crosby, would sing the song. The song would feature in another Crosby film, the 1954 musical White Christmas, which became the highest-grossing film of 1954. (Crosby made yet another studio recording of the song, accompanied by Joseph J. Lilley's orchestra and chorus, for the film's soundtrack album.)

The version most often heard today on the radio during the Christmas season is the 1947 re-recording. The 1942 master was damaged due to frequent use. Crosby re-recorded the track on March 19, 1947, accompanied again by the Trotter Orchestra and the Darby Singers, with every effort made to reproduce the original recording session. The re-recording is recognizable by the addition of flutes and celesta in the beginning. Although Crosby dismissed his role in the song's success, saying later that "a jackdaw with a cleft palate could have sung it successfully," he was associated with it for the rest of his career... 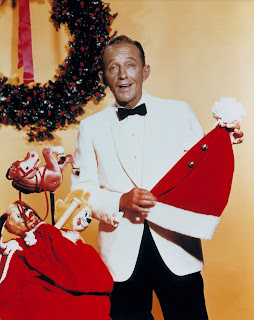