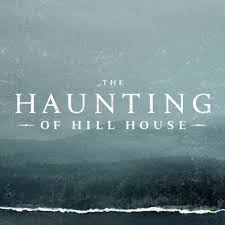 After years of avoiding it, I have entered the world of Netflix. A new world has opened to me, and now I never want to leave the house! I took recommendations from friends at work, and everyone told me that I had to watch the limited series The Haunting of Hill House. My wife refused to watch it with me, and even a 40 year old man like myself was scared at the end of some of the episodes. I have not been scared or spooked like this in years!

The Haunting of Hill House is an American supernatural horror web television series created and directed by Mike Flanagan for Netflix, produced by Amblin Television and Paramount Television. The series is a re-imagining of the 1959 novel of the same name by Shirley Jackson. The plot alternates between three timelines, following five adult siblings whose paranormal experiences at Hill House continue to haunt them in present day. The series also features flashbacks to 1992, depicting the events in Hill House leading up to the eventful night the family departed. 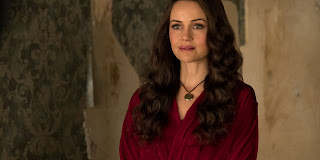 The ensemble cast features Michiel Huisman, Elizabeth Reaser, Oliver Jackson-Cohen, Kate Siegel, and Victoria Pedretti as the adult counterparts of the siblings. Carla Gugino and Henry Thomas portray Olivia and Hugh Crain, the parents, with Timothy Hutton appearing as an older version of Hugh. Promoted as a ten-episode limited series, The Haunting of Hill House was released on October 12, 2018, on Netflix.

The premise is that in the summer of 1992, Hugh and Olivia Crain and their children – Steven, Shirley, Theodora, Luke, and Nell – move into Hill House to renovate the mansion in order to sell it and build their own house, designed by Olivia. However, due to unexpected repairs, they have to stay longer, and they begin to experience increasing paranormal phenomena that results in a tragic loss and the family fleeing from the house. Twenty-six years later, the Crain siblings and their estranged father reunite after tragedy strikes again, and they are forced to confront how their time in Hill House had affected each of them. 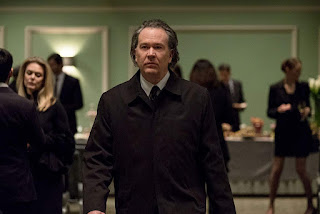 The writing is superb. You would think the horror genre would be getting stale, but this limited series found new ways to scare viewers. The cast was excellent with Timothy Hutton and Carla Gugino stealing the scenes from everyone. The whole cast is outstanding though. Classic movie fans, look for Russ Tamblyn in a supporting role as a therapist as well. I haven't seen him in anything in awhile. If you have Netflix and like a great spooky show, then this is the show for you! You will be scared senseless but you won't be disappointed...

Posted by David Lobosco at 6:52 AM