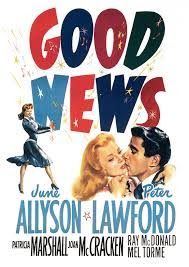 For a long time when I was first watching classic movies, the 1947 film Good News was my favorite musical. It's not my favorite any longer but it's still a pretty good film. Our guest reviewer Bruce Kogan makes his return to our pages reviewing this musical...

Good News was the best musical from the Roaring Twenties from the premier songwriting team of DeSylva, Brown & Henderson. It ran on Broadway for 557 performances in the 1927-29 season and gave the team a number of song hits identified with them like the title song, Just Imagine, Lucky In Love, and The Best Things In Life Are Free. All of those songs made it as well as one of the great dance numbers of the Roaring Twenties, The Varsity Drag.

The musicals of that era had the lightweight nonsensical plots which also was taken from the Broadway show. Big man on campus, Peter Lawford, has to get a passing grade in French to stay eligible for the football squad. He gets mousy student librarian June Allyson assigned as a tutor and the inevitable happens as it does in these films. After that Lawford has to choose between mercenary coed Patricia Marshall and Allyson. It's a struggle, but you guess who he winds up with. 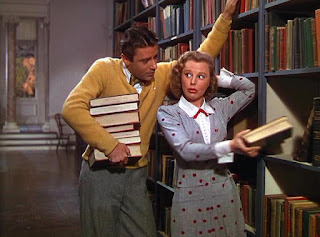 This film is strictly about the music and dance numbers and it offers a rare opportunity to see Joan McCracken singing and dancing which she mostly did on the Broadway stage. She introduces a song especially written for the film Pass That Peace Pipe which was a big hit in 1947 and won for Good News its only Academy Award nomination. Pass That Peace Pipe lost to Zip-A-Dee-Doo-Dah for Best Song. But the number is one of the best dance numbers ever to come from an Arthur Freed produced MGM musical. Joan McCracken died way too young as oddly enough her dancing partner Ray McDonald.

Good News presents an idealized version of the Roaring Twenties and is the quintessential college musical which flooded Hollywood mostly in the years before World War II. It holds up well as entertainment and the songs are still fabulous...

Posted by David Lobosco at 7:54 AM