WHERE ARE THEY NOW: JUDY HARRIET 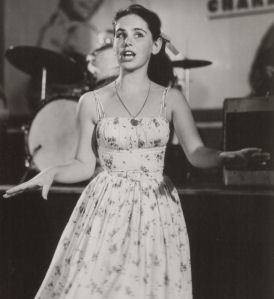 I came along too late for the Mickey Mouse club. I never have been a fan of Walt Disney and Mickey Mouse as a whole yesterday. However, I had a record in my collection called "The Night That Rock N Roll Died" by a little known singer by the name of Judy Harriet. I did some research and she was a member of the Mickey Mouse Club, and of course I had to find out more.

Born Judy Harriet Spiegelman in Los Angeles in 1942 she dropped her last name for performances to avoid the anti-Semitism that still lingered in the 1950's. Her parents were immigrants from Poland, who arrived in America before World War II. Judy's early training was in classical piano and voice, and just prior to the show she had a recital at Carnegie Hall.

She performed for radio, did amateur and variety shows for television, and had released at least one 78rpm recording for Tops records prior to the show. Judy was never a straight dramatic actress, and was not particularly known for her dancing, though she had had lessons. However, she did enjoy sports, including tennis, horseback-riding, and swimming. Judy became a Mouseketeer on the Mickey Mouse Club in 1955.

Judy at thirteen had grown (and developed) more quickly than other Mouseketeers. Even though she was only of average height, she towered over the Mouseketeer boys at that time, which may have caused the directors to put her on the Blue Team at first. Judy was thus usually only seen on Guest Star Day or Circus Day. Because she seemed older and had a nice speaking voice, she was often used to introduce the guest acts, and to do comic bits with them when needed.

In 1956 she was dropped from the lineup but did a few movies. She sang "Hard Rock Candy Baby" with Judy Tyler in the movie Bop Girl Goes Calypso. In 1958 she released two 45 rpm singles, "Tall Paul/'Nuff Said", and "La Paloma/Espana" on the Surf label. (Annette had hit with "Tall Paul" though). In 1959 she recorded "Just A Guy To Love Me/I Cried For The Last Time", also on Surf.

Also that year she sang "The Night Rock 'n' Roll Died" in the Bing Crosby and Debbie Reynolds movie, Say One For Me. The movie was horrible but the soundtrack is memorable. Later that year, she co-wrote "I Promise You" with Bruce Johnston (who later joined the Beach Boys) featured in the Ghost of Dragstrip Hollow. The next year she recorded "Goliath (Big Man)/The Music of Love" and "Buffalo Bop/Restless Doll" for American International Records in 1960. She also released "Waiting for Joe/She's Got Everything" and "Road to Nowhere/Don't" on Columbia.

Between 1959 and 1964 Judy was in demand as a singer for live performances on the teenage show circuit, at civic events, and at military bases. At one such concert at Schofield Barracks on Oahu she was mobbed by 10,000 cheering GI's, and only escaped through the help of a dozen MP's. She was frequently in the fan magazines, and for a time was a member of the 'Teen Magazine variety troupe that also included the Addrisi Brothers, Tommy Cole, Roberta Shore and the Steiner Brothers. She was also visible on the party scene, dating quite a few television stars, but wasn't linked to any serious romances.

In the early sixties Judy released two more 45's thru Columbia, with the songs Waiting for Joe / She's Got Everything and Road to Nowhere / Don't. Judy stopped performing in 1964 after marrying Tony Richman, with whom she has had two daughters. She took part in the Mouseketeer reunion at Disneyland in 1975, and in the television special for the 25th Anniversary in 1980. For the last thrity years she has pretty much stayed away from the limelight. Now 70 years old, she has removed herself from Disney and her teenage years as much as she could, and I don't blame her...