BORN ON THIS DAY: FRANK SINATRA 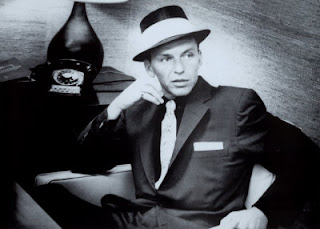 One of the most famous crooners of all-time, Frank Sinatra, was born on this day in 1915. Born on December 12th, Sinatra was the only child of Italian immigrants Natalie Della Garaventa and Antonino Martino Sinatra. Sinatra was raised Catholic. He left high school without graduating,having attended only 47 days before being expelled because of his rowdy conduct. His mother, known as Dolly, was influential in the neighborhood and in local Democratic Party circles, but also ran an illegal abortion business from her home; she was arrested several times and convicted twice for this offense. Sinatra was arrested for carrying on with a married woman, a criminal offense at the time. Sinatra's father, often referred to as Tony, served with the Hoboken Fire Department as a Fire Captain. During the tough years of the 1930s, when the Great Depression hit North America, Dolly nevertheless provided ready pocket money to their son for outings with friends and fancy clothes.Sinatra then worked for some time as a delivery boy at the Jersey Observer newspaper, and as a riveter at the Tietjan and Lang shipyard. Sinatra began singing for tips at the age of eight, standing on top of the bar at a local nightclub in Hoboken. He began singing professionally as a teenager in the 1930s.

Beginning his musical career in the swing era with Harry James and Tommy Dorsey, Sinatra became a successful solo artist in the early to mid-1940s, being the idol of the "bobby soxers." His professional career had stalled by the 1950s, but it was reborn in 1954 after he won the Academy Award for Best Supporting Actor (for his performance in From Here to Eternity).

He signed with Capitol Records and released several critically lauded albums (such as In the Wee Small Hours, Songs for Swingin' Lovers, Come Fly with Me, Only the Lonely and Nice 'n' Easy). Sinatra left Capitol to found his own record label, Reprise Records (finding success with albums such as Ring-A-Ding-Ding, Sinatra at the Sands and Francis Albert Sinatra & Antonio Carlos Jobim), toured internationally, was a founding member of the Rat Pack and fraternized with celebrities and statesmen, including John F. Kennedy. Sinatra turned 50 in 1965, recorded the retrospective September of My Years, starred in the Emmy-winning television special Frank Sinatra: A Man and His Music, and scored hits with "Strangers in the Night" and "My Way".

With sales of his music dwindling and after appearing in several poorly received films, Sinatra retired for the first time in 1971. Two years later, however, he came out of retirement and in 1973 recorded several albums, scored a Top 40 hit with "(Theme From) New York, New York" in 1980, and toured both within the United States and internationally, using his Las Vegas shows as a home base, until a short time before his death in 1998...
Posted by David Lobosco at 5:01 AM