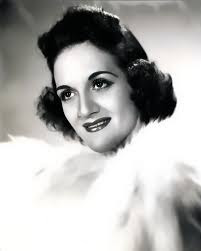 In my opinion the Andrews Sisters were the greatest singing trio of all-time. Laverne Andrews was the most quiet of the sisters, but I believe she was the most beautiful. Here is her sad obituary from the Desert Sun of May 9, 1967. It's hard to be it was 41 years ago...

HOLLYWOOD (UPI)- Death! | broke up the Andrews Sisters! for the last time Monday.

Laverne, 51, died, apparently of cancer complicated by pneumonia. Louis A. Rogers, her husband of 19 years, was at her bedside in their West Los Angeles home when death claimed the eldest member of the renowned vocal trio. Patti and Maxene interrupted their Lake Tahoe engagement to fly home for the funeral which was being arranged today.

Laverne’s illness forced her out of the trio about a year ago. The career of the Andrews Sisters was long and stormy. The trio got its first professional booking in the late 1920s in a Chicago vaudeville show. They rose to the top of the music world with a succession of hits during the 1930s and 1940s but their business harmony was out of tune much of the time. The sisters formed a corporation from which they drew equal salaries but after several sisterly squabbles they dissolved the corporation and broke up the act several times. But each time they patched things up and began singing again. Their first hit record was “Bei Mir Bist Du Schoen.” Other popular favorites among the 900 records that sold fiO million copies were “Rum and , Coca Cola,” “Beer Barrel ; Polka,” “Patience and Forti tude,” “Don’t Sit Under the  Apple Tree.” “I Can Dream, Can’t I?” and “Pennsylvania i Polka.” The Andrews Sisters appeared  in 17 motion pictures, including!; “Buck Privates,” “In the : Navy,” “Swingtime Johnny,” : and “Follow the Boys.” 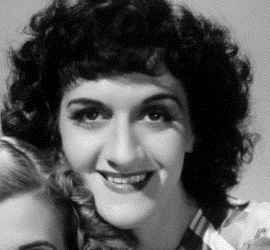 The act broke up in 1953 over money and other causes; Patti complained that Maxene and Laverne treated her like a baby. They feuded among (themselves for two and one-half years, then announced in 1955 the Andrews Sisters were back in business. They cut new albums of some of their old hits and some new songs.)

They made several television appearances, one of the most memorable of which featured the Andrews Sisters singing the hits of The Supremes and the modern trio returning the compliment by vocalizing in their own rock style the standards of Patti, Maxene and Laverne. “It wasn’t just wanting to sing together again,” Laverne said in explaining the reuniting of the trio again, “the public never wanted us to break up.” She said they received 2.000 letters after one of their television appearances. Patti, Maxene and Laverne had come a long way from Minneapolis, where they were born... 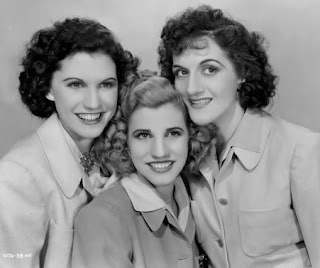