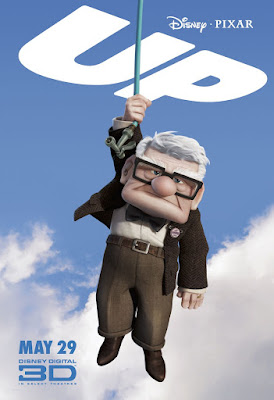 Maybe I am just overly sensitive, but I am not too proud to admit I openly cry at movies. Maybe it's the sentimental side of me. I don't know. My wife is the opposite of me! We recently watched the 2009 cartoon UP with our kids, and I had to leave the room from crying. The beginning of the movie is the saddest opening to a movie I have ever sat through.

Up is a 2009 American 3D computer-animated comedy adventure film produced by Pixar and released by Walt Disney Pictures. Directed by Pete Docter, the film centers on an elderly widower named Carl Fredricksen (Ed Asner) and an earnest young Wilderness Explorer named Russell (Jordan Nagai). By tying thousands of balloons to his home, 78-year-old Carl sets out to fulfill his dream to see the wilds of South America and to complete a promise made to his late wife, Ellie. The film was co-directed by Bob Peterson, with music composed by Michael Giacchino.

Docter began working on the story in 2004, which was based on fantasies of escaping from life when it becomes too irritating. He and eleven other Pixar artists spent three days in Venezuela gathering research and inspiration. The designs of the characters were caricatured and stylized considerably, and animators were challenged with creating realistic cloth. The floating house is attached by a varying number between 10,000 and 20,000 balloons in the film's sequences. Up was Pixar's first film to be presented in Disney Digital 3-D.

Up was released on May 29, 2009 and opened the 2009 Cannes Film Festival, becoming the first animated and 3D film to do so. The film became a great financial success, accumulating over $731 million in its theatrical release. Up received universal acclaim, with most reviewers commending the humor and heart of the film. Edward Asner was praised for his portrayal of Carl, and a montage of Carl and his wife Ellie aging together was widely lauded. The film received five Academy Award nominations, including Best Picture, making it the second animated film in history to receive such a nomination (and Pixar's first Best Picture nomination), following Beauty and the Beast (1991). 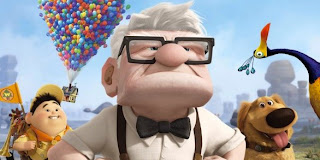 Docter noted that the film reflects his friendships with Disney veterans Frank Thomas, Ollie Johnston, and Joe Grant (who all died before the film's release and thus the film was dedicated to them). Grant gave the script his approval as well as some advice before his death in 2005. Docter recalled that Grant would remind him that the audience needed an "emotional bedrock" because of how wacky the adventure would become; here it is Carl mourning for his wife.Docter felt that Grant's personality influenced Carl's deceased wife Ellie more than the grouchy main character, and Carl was primarily based on Spencer Tracy, Walter Matthau, James Whitmore, and their own grandparents, because there was "something sweet about these grumpy old guys". Docter and Jonas Rivera noted Carl's charming nature in spite of his grumpiness derives from the elderly "hav[ing] this charm and almost this 'old man license' to say things that other people couldn't get away with [...] It's like how we would go to eat with Joe Grant and he would call the waitresses 'honey'. I wish I could call a waitress 'honey'.

Like I said the film starts out so sad, I have tears in my eyes as I write this, but by the end of the film the tone is happy and optimistic. I lose it every time I see the note that Carl finds that his wife wrote him: "Now go ahead and have your own adventure". I don't think I can write anymore... 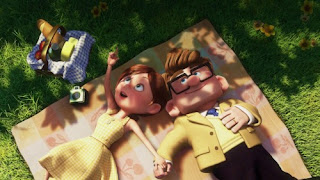